Disclosure:The authors have no conflicts of interest to declare.

Over the past decade, transradial access has grown in popularity. With percutaneous coronary intervention success rates similar to transfemoral access, transradial coronary angiography is associated with fewer vascular and bleeding complications, earlier ambulation, greater postprocedural comfort, and better cost-effectiveness.1–5 A meta-analysis by Ferrante et al. showed a 77% reduction in major vascular complication by using transradial access (OR 0.23; 95% CI [0.16–0.35]).6 In addition, transradial access also reduces the incidence of death, MI, stroke, and overall mortality in ST-elevation MI patients.1 Therefore, the ‘radial-first’ strategy was recommended in the 2015 European Society of Cardiology guidelines for the management of acute coronary syndrome as a class I indication.7

Radial artery spasm is recognized when catheters initially pass through the arm, but subsequent manipulation meets with resistance and causes pain in the arm (Figure 1). This is a common complication and the most common cause of transradial access site crossover.12,13 The incidence of radial artery spasm is 4–5% in large randomized control trials (RADIAL and RIVAL trials).1,14–16 Younger age, female sex, diabetes, and lower BMI are independent predictors of radial artery spasm, as are small radial artery diameter, large sheath:artery size ratio, and multiple catheter exchanges.12

Appropriate equipment selection can minimize the occurrence of radial artery spasm. Long radial sheaths with a tapered dilator and hydrophilic coating are associated with lower rates of radial artery spasm.12,18 Use of a ‘universal’ catheter designed to access both the left main ostium and the right coronary artery ostium (e.g. Terumo Tiger and Jacky catheter) reduces catheter exchanges, which reduces radial spasm.19

Antispasmolytics or vasodilators, such as calcium channel blockers (intra-arterial verapamil or diltiazem) and nitroglycerine, are commonly injected into the radial artery after access is obtained, and some operators repeat it after every catheter exchange.20 While many studies have evaluated the efficacy of different agents, there is no consensus on a standard regimen to prevent radial artery spasm. A systematic review by Kwok et al. proposed that intra-arterial verapamil 5 mg alone or in combination with 100–200 µg of nitroglycerine is the most effective antispasmolytic.15 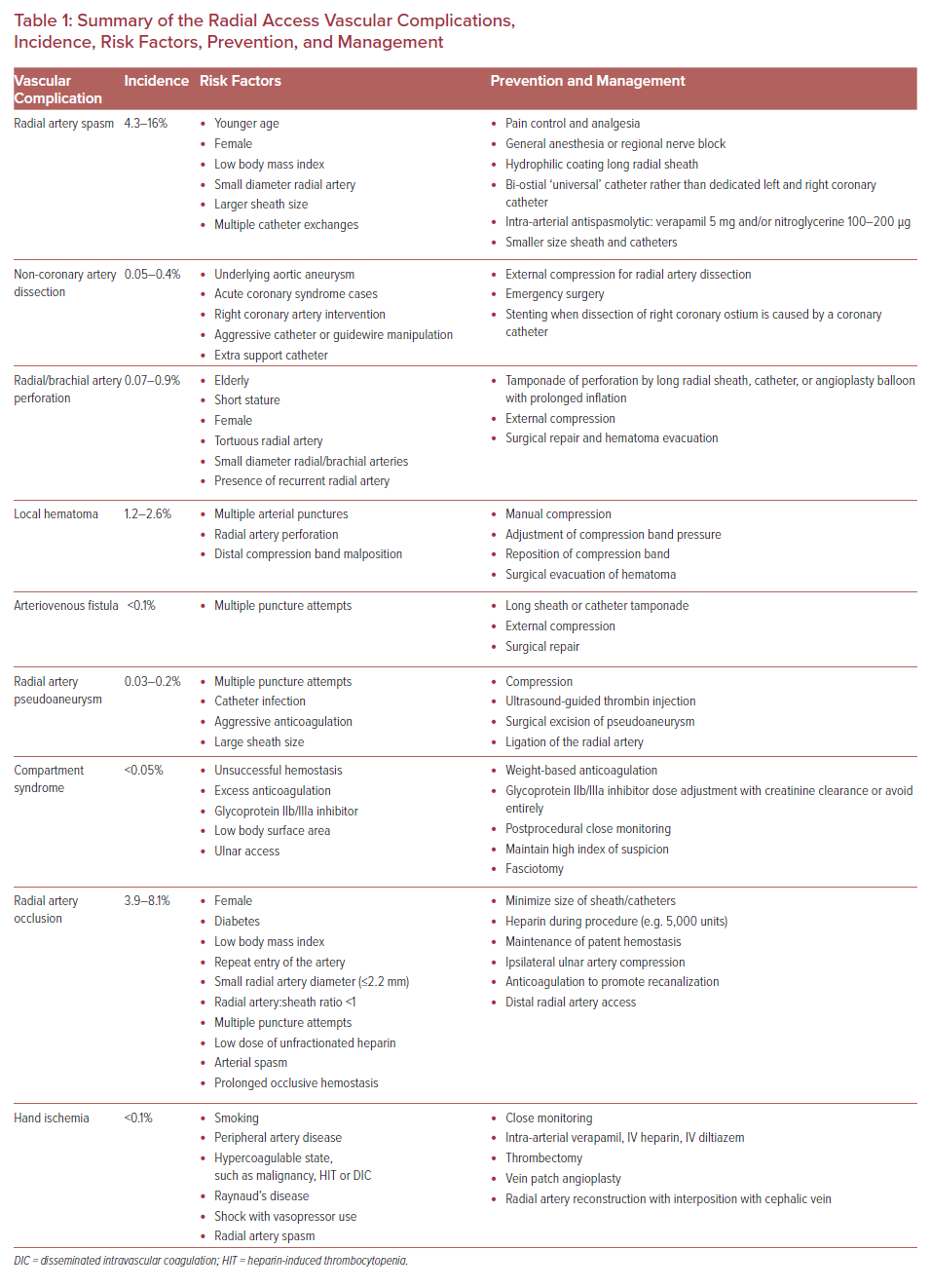 A tear in the wall of a major non-coronary artery leading to the collection of blood within the layers of arterial wall is a rare complication of transradial cardiac catheterization with an incidence of 0.02–0.4%.11,12 The incidence is higher in acute coronary syndrome cases than in elective cases, and it is also higher in percutaneous coronary intervention than in diagnostic cardiac catheterization.21 Arterial dissection can be prevented by ensuring that the catheter is not passing through a radial loop or recurrent radial artery; if there is resistance to initial passage of the catheter, then angiography should be undertaken to ensure that the artery is large enough and straight enough to accommodate the catheter. Using a smaller guide within the diagnostic guide or balloon-assisted tracking with an angioplasty balloon can prevent dissection of tortuous radial or brachial arteries. The most common dissection site is the radial artery (Figure 2A).

Catheter dissections of the radial and brachial artery can usually be managed conservatively by proceeding with the procedure. The catheter itself usually seals the dissection. Arteriography at the conclusion of the procedure is advisable to document the final status of the dissected artery.

Occasionally, with transradial access, innominate tortuosity can render catheter passage difficult, leading to innominate dissection that extends into the ascending aorta. This occurred in our catheterization laboratory when a 66-year-old woman with a 5.2 × 5.2 cm ascending aortic aneurysm and severe aortic regurgitation underwent diagnostic transradial cardiac catheterization. Upon introduction of a Jacky diagnostic catheter over a 0.035 inch Terumo Glidewire into the ascending aorta, the patient complained of chest pain radiating to her neck. Cine images showed a large ascending aortic dissection involving the aortic root and proximal arch (Figure 2B). CT imaging showed that it extended into (and presumably started at) the innominate artery. The patient underwent emergent Bentall root replacement, aortic valve replacement, and coronary artery bypass of all coronary arteries with ligation of the native left main artery, and was discharged 1 month later.

Perforation of the arterial wall with blood extravasation may occur in the radial or brachial artery (Figure 3). It may also present as a hematoma formation proximal to the access site in the forearm. This is an uncommon complication, with an incidence of 0.07–0.9%.11,23,24 Although radial artery perforation is rare, it can lead to severe forearm hematoma and compartment syndrome if it is not managed promptly.

Radial artery perforation occurs most often in patients who are elderly, short, female, or have tortuous arteries. Many cases of perforation occur when a guidewire passes up a small recurrent radial artery that is too small to accept the catheter. Occasionally, a diagnostic catheter will pass, but when the diagnostic procedure is converted to an intervention, the guide catheter will be too large for the recurrent radial artery, and an operator who pushes the catheter too hard can easily cause dissection and perforation. In any situation where resistance to catheter passage is noted, angiography is indicated to define the anatomy. 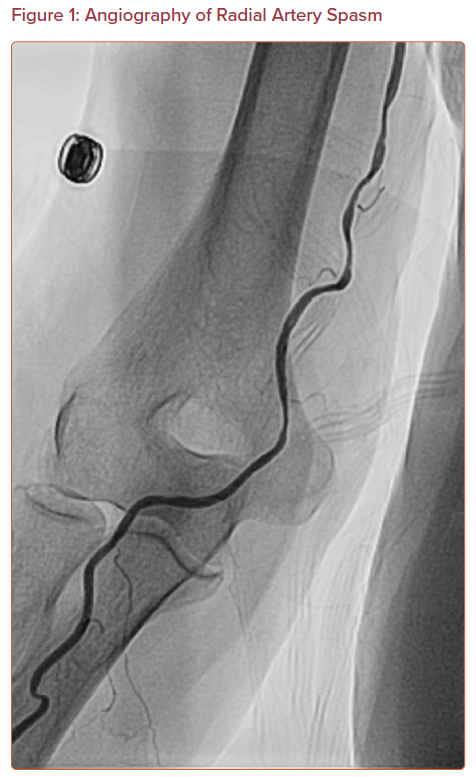 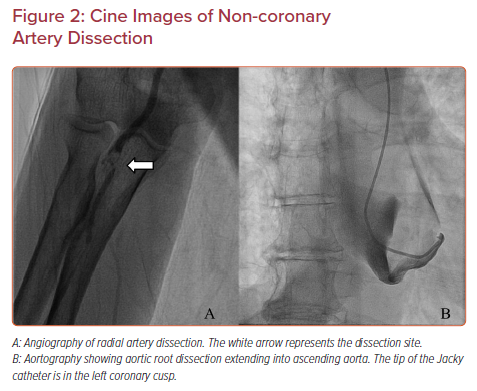 Intraprocedural recognition of radial artery perforation does not prohibit the continuation of the procedure if the wire can be passed proximally into the innominate artery, because the intraluminal long radial sheath or catheter can tamponade the perforated segment.24 At the end of the procedure, radial artery angiography should be obtained to document that the perforation has sealed. Prolonged inflation of a peripheral or coronary artery balloon can be used to seal the perforation if a persistent leak through the perforation is noted.25 External compression with an elastic bandage or blood pressure cuff inflation at the level of systolic blood pressure may also be utilized.26 A delay in making the diagnosis or inability to achieve hemostasis by conservative measures may lead to the need for surgical repair of the arterial perforation, evacuation of hematoma, and treatment of compartment syndrome if necessary. 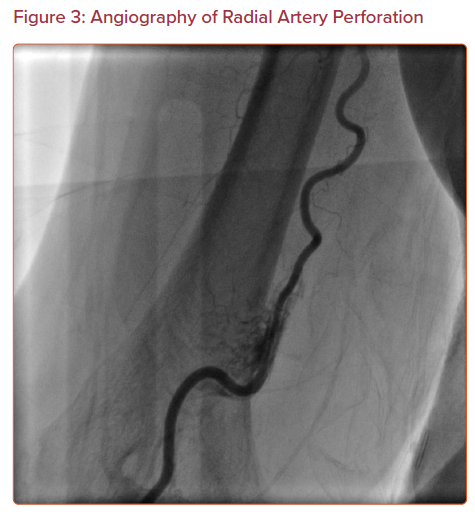 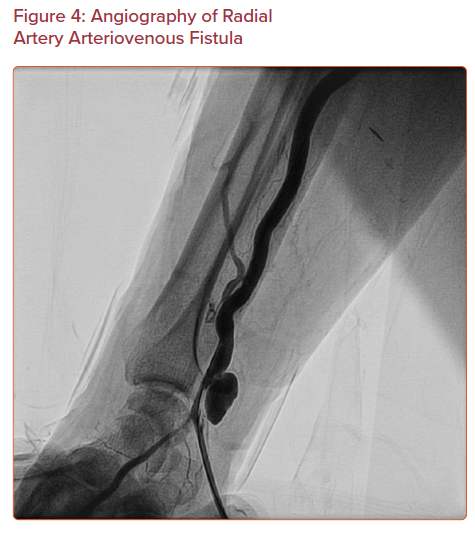 Hematoma is a local accumulation of blood within the soft tissues causing a swelling. It can extend proximally from the access site to the forearm and arm. Femoral access site bleeding is associated with increased mortality.27 Clinically significant transradial access-associated local hematoma incidence is 1.2–2.6%, which is 60% lower than in transfemoral access.1,10,12,28–30 However, in the radial and ulnar cohorts in the SPIRIT of ARTEMIS study, the overall rate of local hematoma after transradial diagnostic coronary angiography was 23% when postprocedural vascular ultrasonography was performed on every patient, although most of these were not clinically significant.16 Most hematomas in this cohort were <5 cm in size. In this study, there was no difference in the incidence of hematoma between standard-dose (50 IU/kg bodyweight) and high-dose (100 IU/kg bodyweight) intra-procedural unfractionated heparin.

The development of hematoma depends on the experience of the operator and cardiac catheterization laboratory team members. Multiple arterial puncture attempts, inadequately managed radial artery perforation, and misplacement of a radial artery compression device (TR Band or HemoBand) are associated with hematoma. Early recognition and treatment of local hematoma are crucial to prevent serious complications, such as compartment syndrome.

When a hematoma is noted, manual compression, adjustment of the compression band pressure, or repositioning of the compression band may be sufficient. However, if the hematoma progresses proximally in the forearm, and particularly if the forearm becomes tense and swollen, or if the patient complains of anesthesia or pain in the hand, compartment syndrome should be suspected, and emergent vascular surgical consultation should be obtained.

Arteriovenous fistula is an abnormal connection between an artery and a vein (Figure 4). This is a rare complication with an incidence less than 1 in 1,500. Only 12 isolated cases out of 17,870 patients are reported in three different cohorts.11,16,23 It may be asymptomatic, or it may present with persistent pain and swelling at the puncture site with visibly dilated veins and a palpable thrill. Multiple punctures increase the risk of arteriovenous fistula, because the radial artery is surrounded by small veins.

Arteriovenous fistula can be managed conservatively, similar to radial side branch perforation, if it is recognized during procedure. If a J-tip wire can pass through the artery proximally, then place the long sheath or catheter across the damaged segment. The sheath or the catheter will seal the connection between the artery and the vein. Prolonged compressive bandage can be used as an adjunctive treatment. Indications for surgical repair are symptomatic arterial steal phenomenon, venous congestion of extremity, or high-output cardiac state.30

Pseudoaneurysm results from a penetrating injury of the arterial wall (e.g. catheter access to the artery) causing a pulsating extraluminal hematoma and contained hemorrhage that communicates with the arterial lumen. The usual presentation is a pulsatile mass with or without tenderness several days after the catheterization procedure. The diagnosis is confirmed by a systolic murmur and Doppler ultrasound showing to-and-fro flow from the radial artery. The incidence of radial artery pseudoaneurysm due to transradial access is 0.03–0.2%.1,16,23 Risk factors of pseudoaneurysm are multiple puncture attempts, catheter infection, aggressive anticoagulation therapy, and large sheath sizes.31

Compartment syndrome is due to compression of nerves, veins, arteries, and muscles inside the forearm compartment, leading to ischemic necrosis of the tissue. Its sign is well known as the ‘five Ps,’ including pain, pallor, paresthesias, pulselessness, and paralysis. The incidence is reported at 0.004–0.05%, none of the 3,507 patients in the transradial access group in the RIVAL trial developed compartment syndrome.1,16,34 Risk factors for compartment syndrome include radial artery perforation, unsuccessful compression at the puncture site, excess anticoagulation, glycoprotein IIb/IIIa inhibitor administration, and low body mass index.11 When ulnar access is used, entry of the artery more than 2 cm proximal to the wrist can lead to compartment syndrome, because the artery is deep and not easily compressed against underlying bone.

Patients who have intact collaterals from the ulnar artery are asymptomatic despite radial occlusion, because the palmar circulation provides collateral flow. The occurrence of hand or finger pain, or discoloration, weakness, cold, or sensory deficit should prompt immediate evaluation and, if necessary, consultation with a vascular surgeon. If the diagnosis is confirmed, then aggressive treatment is indicated, as described above.

Hand ischemia is a rare complication of transradial access with an incidence less than one in 1,000.45 The symptoms of hand or finger ischemia are dusky appearance of the hand or finger, paresthesia, weakness, pain, and cyanosis. There is an absence of Doppler signals in the ipsilateral radial artery and palmar arch in conjunction with a compromised ulnar artery collateral flow on ultrasound. The etiology is assumed to have two concurrent events: embolization of radial artery thrombus and in situ thrombosis of collateral vessels from vasospasm.

Radial artery spasm is the most common cause of access site crossover. Radial spasm is prevented with adequate pain control, and treated with verapamil and/or nitroglycerine. Hemorrhagic complications, such as perforation, hematoma, arteriovenous fistula, and pseudoaneurysm, are generally treated by prolonged compression. Precise detection and management of hemorrhagic complications will prevent development of compartment syndrome, which can leave the patients with long-term morbidity after fasciotomy. Thrombotic complications, such as radial artery occlusion and hand ischemia, are treated with anticoagulation. Preventive strategies and vigilant postprocedural monitoring should be implemented in daily practice at every cardiac catheterization laboratory.