Iron deficiency (ID) has been increasingly recognized as an important co-morbidity associated with heart failure (HF). ID significantly impairs exercise tolerance and is an independent predictor of poor outcomes in people with HF irrespective of their anemic status. Diagnosis of ID in people with HF is often missed and therefore routine screening for ID is necessary for these patients. IV iron repletion has been recommended in HF treatment guidelines to improve symptoms and exercise capacity. People with ID and HF who are treated with IV iron have an improved quality of life, better 6-minute walk test results and New York Heart Association functional class. The effect of iron therapy on re-hospitalization and mortality rates in people with HF remains unclear. Large-dose oral iron treatment has been found to be ineffective in improving symptoms in people with HF. This review summarizes the current knowledge on prevalence, clinical relevance, and the molecular mechanism of ID in patients with chronic HF and the available evidence for the use of parenteral iron therapy.

Disclosure: The author has no conflict of interest to declare.

Heart failure (HF) is a major health problem and about 6 million adults are affected in the US alone, at a cost of approximately $20 billion per year.1 Despite the availability of new treatment strategies, the incidence, number of hospitalizations and mortality associated with HF remains a big health burden.1 In addition to increasing age, the factors that contribute to poor prognosis for people with HF are its associated co-morbidities. Iron deficiency (ID) has been increasingly recognized as an important co-morbidity that contributes to increased incidence, re-hospitalization and poor survival in people with HF.2 Anemia is the ultimate consequence of ID, but the conditions are distinct clinical scenarios. Identification of ID in people with chronic diseases such as HF is important as iron repletion has shown to improve patient’s symptoms irrespective of anemic status.

Iron is an essential micronutrient in all types of cells and is particularly important in energy-demanding cells such as cardiomyocytes.3 Iron acts as a co-factor for several enzymes involved in oxidative phosphorylation and plays a key role in oxygen transport through erythropoiesis. The etiology of ID in HF is not clearly understood; it could possibly be due to multiple factors including poor iron absorption due to edema in the gastrointestinal tract, low bioavailability of iron, and a chronic inflammatory state.4 At the molecular level, one possible mechanism of ID is related to hepcidin, an iron regulatory hormone, whose synthesis is stimulated when iron stores or levels of the cytokine interlukin-6 (IL-6) are elevated. In chronic inflammatory conditions, hepcidin levels are increased due to an increase in IL-6 and/or fluctuating iron levels. Elevated hepcidin results in removal of ferroportin – a protein that increases iron efflux into the bloodstream – from the duodenal surfaces.5 However, in HF, a reverse mechanism exists: initially hepcidin level increases but as HF progresses, hepcidin is downregulated which maintains ferroportin levels thereby increasing iron efflux.6 The reason for this is still not clearly understood. Importantly, lower hepcidin levels have been associated with increased 3-year mortality rate in people with acute HF.7

Another mechanism underlying ID in people with HF is thought to be liver congestion that leads to increased hemosiderin-laden macrophages.8 Cardiomyocytes have a high-energy demand and are therefore susceptible to ID. In patients referred for cardiac transplantation, myocardial iron stores have been found to be lower compared with patients without HF.9 HF patients also showed reduced myocardial oxygen respiration and reduction in mitochondrial respiratory enzymes.10 In experimental mice models, the left ventricular cardiomyocytes with depleted iron-regulatory protein (IRP), which maintains intracellular iron availability, showed reduced mitochondrial complex I activity and the mice were unable to increase ventricular systolic function in response to dobutamine stress.11 Despite there being different possibilities for the mechanism underlying ID in HF disease, its pathophysiology is unclear.

The prevalence of ID has been widely studied in patients with chronic HF with reduced ejection fraction (HFrEF) and ranges between 36 and 69 % have been found among different ethnic groups with the Portuguese having the lowest and British having the highest prevalence rates.12

In patients presenting with acute decompensated HF (ADHF), the prevalence of ID is much higher than those with chronic HF.7 A gender difference in the prevalence of ID was shown in a French study of 832 people with ADHF; 66 % of men and 75 % of women had ID.13 Independent correlates of ID in HF include increased age, higher New York Heart Association (NYHA) functional class, being a woman, elevated N-terminal pro-B-type natriuretic peptide (NT-proBNP), and high sensitivity C-reactive protein.2 The prevalence of ID in people with HFpEF is still unknown.

ID greatly decreases the quality of life irrespective of the presence of anemia in patients with HFrEF. In one study, patients with concurrent ID and HFrEF had lower peak oxygen consumption (peak VO2) and increased ventilator response to exercise (VE-VCO2 slope) compared with those without concurrent ID with both reflecting poor exercise capacity.14 Quality of life has been shown to be significantly affected in HF patients irrespective of diagnostic criteria using either the European Quality of Life-5D, Kansas City Cardiomyopathy, or the Minnesota Living with Heart Failure questionnaires.15

In one study, of 1,506 HF patients, short-term 6-month follow-up showed a higher risk of death in those with HF and ID compared with patients with HF and no ID (8.7 % versus 3.6 % respectively, p<0.001).16 Similarly, in long-term follow-up over approximately 2.5 years, those with ID had a higher likelihood of dying than those without ID.16 The association with mortality was independent of anemic status.

In another study involving 157 people with HF, participants with non-anemic ID had twice the risk of death than anemic patients on iron therapy.17 In a study that used serum-soluble transferrin receptor (sTfR) and hepcidin levels to define ID in people with ADHF, there was a 5 % in-hospital mortality and a strikingly higher risk of death (95 % CI [2.97–14.62], p<0.001) within 12 months of discharge.12

The definitive role of ID in patients with HF with preserved ejection faction (HFpEF) is poorly understood. In a small study involving 26 HFpEF subjects, neither cardiac function (both systolic and diastolic) nor reduced exercise capacity was dependent on ID.18 In another study involving 40 HFpEF patients, ID was a predictor of decreased exercise tolerance independent of ventricular diastolic function, renal function, hemoglobin and NT-proBNP.19 There was a significant correlation of both transferrin and ferritin levels with peak VO2 in these subjects. The difference in results between the two studies might be because the latter study involved subjects with more advanced disease (higher NT-proBNP, higher NYHA class, previous history of ADHF and relatively lower peak VO2). More studies are required to identify the significance of ID in people with HFpEF.

Diagnosis of ID in HF is complicated by the fact that the symptoms of fatigue and exercise intolerance associated with ID overlap with the symptoms of HF. ID is defined as absolute and functional depending on the serum ferritin concentration (a marker of iron stores) and saturation level of transferrin – the iron transport protein. In the general population, a serum ferritin cut-off value of 30 µg/l is used for the diagnosis of ID.20 Ferritin is an acute-phase reactant, therefore a higher cut-off serum level is used for diagnosis of ID in people with chronic inflammatory state. Absolute ID is defined as reduced iron stores despite normal iron homeostasis diagnosed as serum ferritin level of <30 µg/l (Table 1). Functional ID is defined as an inability to meet the body’s iron demand despite having normal iron stores. It is measured by a combination of serum ferritin (100–300 µg/l) and transferrin saturation (<20 %) levels.3 The gold standard assay to diagnose ID is the bone marrow Prussian blue stain to identify absence of iron granules. It is an invasive procedure and is not routinely used.

Having proven the significant correlation of ID in HF patients, several clinical trials of iron therapy have been conducted. The current treatment guidelines for HF with ID is listed in Table 2 and is based on two large trials: Ferinject® Assessment in Patients With IRon Deficiency and Chronic Heart Failure (FAIR-HF) and A Study to Compare the Use of Ferric Carboxymaltose With Placebo in Patients With Chronic Heart Failure and Iron Deficiency (CONFIRM-HF).21,22 Both trials tested intravenous ferric carboxymaltose (FCM) in patients with ambulatory chronic systolic HF with ID in NYHA classes II and III. The FAIR-HF trial included 459 HFrEF patients (EF <45 %) who completed a self-reported Patient Global Assessment, which improved in 50 % (n=147) of patients in the FCM group compared with 28 % (n=41) of the placebo group, along with improvement in NYHA functional class, 6-minute walk test and quality-of-life assessments. The positive changes were present in patients with ID both with and without anemia. CONFIRM-HF included 304 HFrEF patients and after 6 months of iron treatment, the primary endpoint of a 6-minute walk test significantly improved in the FCM group compared with the placebo group. All secondary endpoints including NYHA class, quality of life, fatigue score and time for first rehospitalization improved significantly in the FCM group. Both trials did not show any adverse side-effects with IV iron therapy. Although individual clinical trials were not tested for major clinical events, a meta-analysis including FAIR-HF, CONFIRM-HF, EFfect of Ferric Carboxymaltose on exercIse CApacity and Cardiac Function in Patients With Iron deficiencY and Chronic Heart Failure (EFFICACY-HF) and FER-CARS-01 assessed the effect of iron therapy in cardiovascular hospitalization, and mortality in patients with HF and ID.23 Treatment with IV FCM had lower rates of combined HF hospitalizations and cardiovascular mortality (rate ratio 0.53, 95 % CI [0.33–0.86], p=0.011). These findings from the meta-analysis need to be validated in randomized clinical trials.

The Iron Repletion Effects on Oxygen Uptake in Heart Failure (IRONOUT HF) study is a large-scale randomized clinical trial that tested the role of high-dose oral iron therapy in 225 patients with HFrEF and ID.24 The primary endpoint was change in peak VO2 at 16 weeks and secondary endpoints included change in NT-proBNP, 6-minute walk test and quality of life. In contrast to results from trials that used IV iron, the IRONOUT HF trial failed to show improvements in primary and secondary endpoints.

ID is more common in patients with HF and is often overlooked because of overlapping clinical symptoms. ID in HF patients is associated with reduced exercise tolerance, poor quality of life and increased rehospitalizations and mortality. Routine screening for ID in patients with HF and treatment with iron is recommended by HF treatment guidelines.1 Parenteral iron improves patient symptoms, quality of life and exercise capacity after iron therapy.26 Despite improvements in HF symptoms, major clinical outcomes were not tested in clinical trials. Further, all trials included only patients with HFrEF and the role of ID in patients with HFpEF is not clearly understood. More randomized clinical trials that might answer the open questions on the effect of iron repletion on long-term symptoms, effects on rehospitalization and survival in patients with concurrent ID and HF are currently underway. 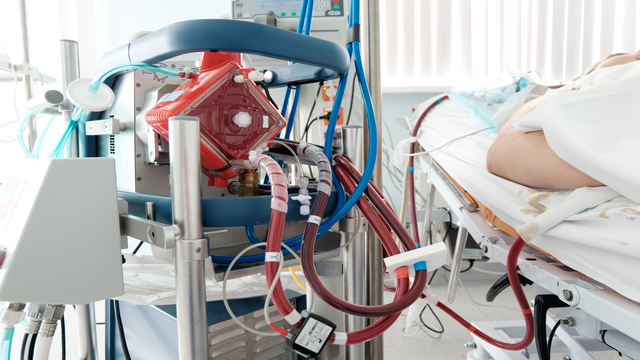