Atrial fibrillation (AF) is a highly prevalent arrhythmia associated with a fivefold increase in the risk of stroke. However, this risk is not homogeneous and varies considerably depending on the presence of several demographic and clinical factors. Independent risk factors for stroke in patients with AF include age ≥65 years, female sex, congestive heart failure, prior stroke or transient ischemic attack, hypertension, diabetes mellitus and vascular disease. Based on these indicators, risk stratification schemes to identify patients at low-, moderate-, and high-risk for stroke have been developed and validated. The CHADS2 and CHA2DS2-VASc schemes are widely used and have good predictive accuracy for stroke. Current guidelines recommend the CHA2DS2-VASc scheme, in part because it more accurately identifies patients at truly low risk for stroke who do not require antithrombotic therapy. This article provides an overview of risk factors for stroke in patients with AF, including discussion of the CHADS2 and CHA2DS2-VASc schemes.

Atrial fibrillation (AF) is the most common clinically significant arrhythmia, with an overall prevalence of approximately 1 % in the general population.1 An estimated 2.3 million adults in the US have AF, and this number is projected to increase to 5.6 million by 2050.1 The most clinically important complication from AF lies in the risk for cardiac thrombus formation and systemic embolism. Accordingly, AF has been shown to be a potent independent risk factor for embolic strokes.2 Non-valvular AF increases the risk of stroke by nearly fivefold.2 However, the risk of stroke varies greatly, ranging from 1 % to 15 % per year,3 and is highly dependent on the presence of other coexisting risk factors. Identifying AF patients at risk for stroke has important therapeutic and prognostic implications. Thromboprophylaxis with anticoagulants and anti-platelet agents can reduce the risk of stroke in appropriately selected patients with AF,4 but carries an increased risk of bleeding and may require lifestyle modifications such as dietary changes, and frequent monitoring if warfarin is used. To balance the risks and benefits of thromboprophylaxis, AF patients at very low risk for stroke usually do not require therapy. Those at low-to-moderate risk may be treated with anti-platelet therapy or anticoagulation, while those at moderate or high risk generally require prophylactic anticoagulation. In addition to identifying risk factors for stroke in AF patients, several schemes have been developed to stratify patients into risk groups to facilitate clinical decision-making.

This article reviews the risk factors for stroke in patients with AF, and risk stratification schemes that can be used to identify patients at risk of stroke from AF.

The following sections discuss identified clinical factors associated with a significantly increased risk of stroke in patients with AF.

Female sex has been noted to be an independent risk factor for stroke in several studies of AF patients.6,7,10–12 In the systematic review of 18 studies described in the previous section, female sex was a significant risk factor in five of 10 trials that considered sex.9 Of note, one of the five trials showed that this significant association was maintained only in those with sustained AF, but not paroxysmal AF. Furthermore, one of the 10 studies that considered sex showed male sex to be a significant risk factor for stroke only in those with paroxysmal AF. 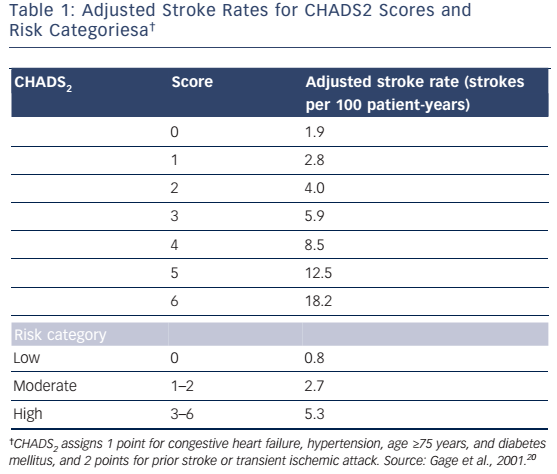 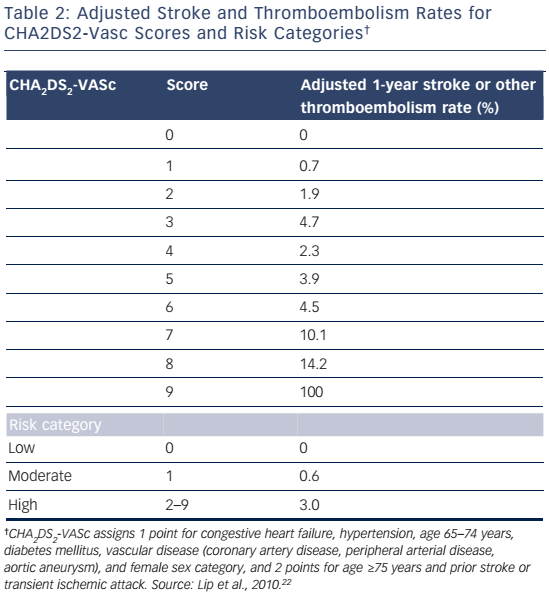 Prior Stroke or Transient Ischemic Attack

Vascular disease (i.e. myocardial infarction, peripheral arterial disease) has been found to be an independent predictor of thromboembolism in non-valvular AF.13 Several studies have shown prior myocardial infarction to be significantly associated with an increased risk of stroke in patients with AF, in both univariate5,14 and multivariate analyses.15–17 The presence of complex atherosclerotic aortic plaques in the thoracic aorta demonstrated on transesophageal echocardiogram has also been shown to independently increase the risk of thromboembolic events in AF patients prescribed aspirin and low dose warfarin (international normalized ratio goal 1.2–1.5).18 Moreover, in a retrospective review of stroke patients with non-valvular AF, those with high-grade (≥50 %) carotid stenosis had more cortical infarcts suggesting that carotid artery disease may be associated with stroke in AF.19

Stratification Schemes to Identify Patients at Risk of Stroke from AF

To identify patients at low, moderate or high risk of stroke from AF, several stratification schemes have been developed. A listing of approximately 15 different stratification schemes and the factors included in each risk category has been published previously.8 We will focus our discussion on the two most commonly used schemes.

In 2001, Gage et al.20 proposed the CHADS2 stroke risk stratification scheme, which was derived from prior schemes developed by the Atrial Fibrillation Investigators (AFI) and Stroke Prevention in Atrial Fibrillation (SPAF) investigators. CHADS2 serves as an acronym for these risk factors, and includes congestive heart failure (1 point), hypertension (1 point), age ≥75 years (1 point), DM (1 point) and history of stroke or TIA (2 points). CHADS2 was validated using the National Registry of Atrial Fibrillation (NRAF), which included hospitalized Medicare beneficiaries with AF and thus represented a real-life cohort. Stroke rates were increased by a factor of approximately 1.5 for each 1-point increase in CHADS2 score. The adjusted stroke rates for CHADS2 scores of 0, 1, 2, 3, 4, 5 and 6 were 1.9, 2.8, 4.0, 5.9, 8.5, 12.5 and 18.2 strokes per 100 patient-years, respectively (see Table 1).20 In a second analysis aimed at validating CHADS2, conducted in patients prescribed aspirin in multicenter trials, those at low risk (score of 0), moderate risk (score of 1–2) and high risk (score of 3–6) were found to have average rates of 0.8, 2.7 and 5.3 strokes per 100 patient-years, respectively.21 CHADS2 was also shown to have greater predictive accuracy for stroke compared with the AFI and SPAF schemes.21

The CHADS2 scheme continues to be widely used in clinical practice. Advantages of the CHADS2 scheme include the fact that it has been validated in multiple populations4,20–22 and that it is easy to use because all five risk factors can be readily obtained from the patient’s history. Important limitations are that the NRAF included only hospitalized older patients not receiving anticoagulation, and may therefore have selected individuals at higher risk for stroke. In addition, even patients with a CHADS2 score of 0 had an annual stroke rate of 1.9 %; thus, the scheme does not accurately identify patients at very low risk.

The CHA2DS2-VASc risk stratification scheme was developed by Lip et al.22 in 2009 in an attempt to improve the CHADS2 scheme. The authors pointed out that some risk factors associated with increased risk of stroke in AF, including female sex and vascular disease18,23–25 (i.e. myocardial infarction, peripheral vascular disease, and complex aortic plaque) are not included in the CHADS2 scheme. CHA2DS2-VASc incorporates these risk factors and also places increased emphasis on the importance of age. The CHA2DS2- VASc scheme comprises congestive heart failure (1 point), hypertension (1 point), age ≥75 (2 points), DM (1 point), stroke/TIA/thromboembolism (2 points), vascular disease (1 point), age 65–74 years (1 point), and sex category-female (1 point). CHA2DS2-VASc was validated in a large cohort of patients participating in the Euro Heart Survey for AF. The adjusted 1-year rates for stroke or other thromboembolism for CHA2DS2-VASc scores ranging from 0 to 9 are shown in Table 2.22 In addition, the stroke or thromboembolism rates for those at low (score of 0), moderate (score of 1) and high risk (score of ≥2) were 0 %, 0.6 % and 3.0 %, respectively.22

The CHA2DS2-VASc scheme has several advantages compared with CHADS2. It was validated in a more representative real-life cohort and was also shown to have better predictive accuracy than CHADS2.22
CHA2DS2-VASc identifies patients at very low risk for stroke (score of 0) who do not require anti-thrombotic therapy,8,26 and reduces the number of patients stratified to the moderate risk group (score of 1) for whom there is uncertainty about whether to treat with aspirin or an anticoagulant.22,27,28

Other Risk Factors for Stroke

Several other clinical and non-clinical risk factors for stroke in AF patients have been reported. However, these factors are less commonly used in everyday clinical practice, in part because they require additional testing and the results are often not readily available at the time of presentation.

Left atrial size measured from the M-mode echocardiogram was shown to be a strong independent predictor of stroke in one study29 but not in a later study.30 Left atrial appendage length and width obtained via trans-esophageal echocardiogram was shown to be associated with risk of thromboembolism on univariate analysis but not multivariate analysis.31 In the same study, thrombus in the left atrium or left atrial appendage was associated with increased risk of thromboembolism on univariate but not multivariate analysis.31 Another trans-esophageal echocardiogram study showed that spontaneous echo contrast and complex atherosclerotic plaque in the thoracic aorta were independently predicative of thromboembolism.18 In summary, the incremental value of echocardiographic parameters for assessing stroke risk in patients with AF is unproven.

Chronic kidney disease (CKD) is a strong independent risk factor for thromboembolism in patients with AF. In one analysis it was reported to be second only to prior stroke or TIA.32 In a retrospective analysis of a large cohort of patients with AF not receiving anticoagulation, both an estimated glomerular filtration rate (eGFR) <45 ml/min/1.73m2 and the presence of proteinuria were associated with significantly increased risk of thromboembolism.33 In AF patients enrolled in the SPAF III trial who were assigned to the aspirin or fixed low-dose warfarin group, eGFR as a continuous variable was independently predictive of thromboembolism.17 In another retrospective analysis of patients assigned to the aspirin arm of the Atrial Fibrillation Patients Who Have Failed or are Unsuitable for Vitamin K Antagonist Treatment (AVERROES) trial, stage III CKD was shown to be independently associated with increased risk of thromboembolism.34 Finally, in an analysis of patients enrolled in the Rivaroxaban Once-daily, direct factor Xa inhibition Compared with vitamin K antagonism for prevention of stroke and Embolism Trial in Atrial Fibrillation (ROCKET-AF) study, decreasing creatinine clearance (CrCl) was shown to independently predict thromboembolism.32 In addition, the authors proposed an improvement to the CHADS2 scheme by giving 2 extra points for CrCl <60 ml/l and represented the new scheme as R2CHADS2. This new scheme was validated in a separate large cohort of ambulatory AF patients and was shown to provide better stroke risk reclassification compared with CHADS2.32

In an analysis of 78,844 AF patients in the UK General Practice Research Database, a C-reactive protein level >50 mg/l was significantly associated with stroke.8 In a pooled analysis of participants in the SPAF trials (SPAF I-III), estrogen hormone replacement therapy was associated with a higher risk of ischemic stroke.6 Serum high-density lipoprotein and total cholesterol have also been shown to be independent predictors of stroke in older patients with persistent or permanent AF.14 However, none of these markers are suitable for clinical use in estimating stroke risk.

Analyses of the risk of stroke in AF do not always make the distinction between paroxysmal and non-paroxysmal (i.e. persistent and permanent) AF. However, the risk of stroke by subtype of AF has been examined in several trials and has not emerged as an independent risk factor for stroke;7,9,37 i.e. the risk for stroke did not differ according to whether AF was paroxysmal, persistent, or permanent. However, in a recent meta-analysis of nearly 100,000 patients with AF, non-paroxysmal AF was associated with a 38 % greater risk of thromboembolism during long-term follow-up compared with paroxysmal AF.38

As a result of the increased utilization of implanted cardiac devices – including pacemakers, defibrillators, and loop recorders, as well as wearable devices such as 30-day event monitors – clinically ‘silent’ or asymptomatic AF is being detected with increasing frequency. However, although the prevalence, duration, and burden of AF detected by these devices have been shown to be independent risk factors for stroke and thromboembolism, the Randomized Trial of Anticoagulation Guided by Remote Rhythm Monitoring in Patients With Implanted Cardioverter-Defibrillator and Resynchronization Devices (IMPACT) study failed to show a beneficial effect of anticoagulation therapy on a composite outcome of ischemic stroke, embolic events, and major bleeding.39 Hence, additional studies are needed to determine the optimal management of patients with subclinical AF detected by cardiac monitoring devices.