Ischemic heart disease is the leading cause of death among adults and one of the most common reasons for emergency department (ED) visits across the US. There are approximately five to seven million ED visits for acute chest pain syndromes annually; however, only 5% of these patients are ultimately diagnosed with acute myocardial infarction (AMI) and an additional 10% have non-AMI acute coronary syndromes (ACS). Thus, 85% of patients have non-ACS causes for their symptoms. From the ED perspective, it is important to expeditiously distinguish between these two groups of patients.

The optimal use of cardiac markers depends upon what exactly the clinician is trying to use them for. Markers with high positive-predictive values are ideal to tailor aggressive care for patients who are at a high risk of cardiovascular complications. Patients most likely to benefit from early invasive care with a rapid transition to cardiac catheterization can be more expeditiously identified by markers with high positive-predictive values. Conversely, because the great majority of patients who present to the ED with potential ACS do not ultimately have a cardiac explanation for their symptoms, a marker with a high negative-predictive value is useful to allow expeditious evaluation (rule out ACS) and disposition from the ED. To that end, a panel of cardiac markers may ideally provide for both a rapid 'rule out' and a rapid identification of patients with high-risk ACS.

There are several cardiac markers in common practice that individually can assist the evaluation of patients with acute coronary syndromes, but combinations of cardiac markers are even more useful.

Therefore, in most cases, single measurements cannot be safely used for the admission/discharge decision. Use of single measurements of CK-MB would result in an unacceptable miss rate with respect to diagnosis of AMI and prediction of cardiovascular complications. Serial CK-MB measurements over six to nine hours have been widely employed in chest pain observation units and are considered sufficient, if negative, to safely exclude AMI, or allow further diagnostic testing or ED release, depending upon the clinical scenario.5 An alternative strategy is to examine the change in CK-MB values within two hours of ED presentation. The clinician must compare the two CK-MB values because a positive value is based on the 'delta' between values. Thus, both values may be negative but if there is a change in value, even within the normal range, it may be a positive test. A rise in CK-MB >1.6ng/ml over the two-hour period following presentation achieves a sensitivity for detection of AMI of 94%, which is better than using the two-hour CK-MB value alone (75%).6

Patients with skeletal muscle disease, acute muscle exertion, chronic renal failure, and cocaine use can have elevations in levels of CK-MB in the absence of infarction.7-9 In order to distinguish true positive elevations (secondary to myocardial injury) from the false positive elevations (due to skeletal muscle injury), the measurement of CK-MB as a percentage of total CK has been used (relative index). There is no clear consensus on whether absolute CK-MB or the CK-MB relative index is the preferred test for patients with potential acute coronary syndromes.10-12 It is also important to note that a patient with skeletal muscle damage can also sustain an MI and, thus, the large amount of total CK may reduce the percentage value of CK-MB by obscuring a relatively smaller but significant CK-MB release from the heart. This may impact the ability to diagnose AMI in a setting where both ACS and rhabdomyolysis may occur (such as cocaine users).

Cardiac troponin I (cTnI) is more specific than other markers for myocardial injury. Following AMI, cTnI becomes elevated at the same rate as CK-MB but it remains elevated for seven to 10 days. Troponin I has a higher specificity (less likely to be falsely positive) for myocardial necrosis than CK-MB in selected subsets of patients with acute coronary syndromes, such as patients with recent surgery, cocaine use, chronic renal failure, and skeletal muscle disease.7-9

In ED patients with potential ACS without these confounding conditions, cTnI has similar sensitivity and specificity for detection of AMI as CK-MB.8,13,14 Elevations in cTnI predict cardiovascular complications independent of CK-MB and the ECG.13-14 Elevations in cTnI and cardiac troponin T (cTnT) can also be used to determine which patients are more likely to benefit from certain therapies (such as treatment with glycoprotein 2b/3a inhibitors and cardiac catheterization within 48 hours (early invasive therapy)).15

cTnT is not as specific for myocardial injury as cTnI, but it is an independent marker of cardiovascular risk in patients with ACS.13,16

Combined analysis of four studies assessing the predictive properties of single cTnI values at the time of presentation for AMI found a sensitivity of 39% and specificity of 93% (see Table 1).3 Another analysis of six cTnT studies found similar results.3 Serial sampling increases sensitivities to 90% to 100% with specificities of 83% to 96% for cTnI and 76% to 91% for cTnT.3 Elevated values of the cardiac troponins in patients with non-serotonin (ST) segment elevation MI increase the short-term risk of death 3.1-fold (1.6% versus 5.2%).17 Although the cardiac troponins are useful for both diagnosis and risk stratification of patients with chest pain,18 ACS and AMI cardiac marker testing in the ED will not identify most ED patients that subsequently develop adverse events.19,20 Thus, patients with initially negative markers still require an evaluation and testing, as dictated by their clinical presentation.

Myoglobin is released from the cell following injury more rapidly than CK-MB or the cardiac troponins. As a result, myoglobin levels rise faster than CK-MB and cardiac troponins, reaching twice their normal values within two hours and peaking within four hours of AMI symptom onset. Myoglobin achieves its maximal diagnostic sensitivity within five hours of symptom onset.21 The sensitivity of myoglobin at the time of ED presentation is 49%, exceeding that of CK-MB and the troponins, but the specificity is lower (87%).3

Serial quantitative testing over one hour, evaluating both absolute values and a change of 40ng/ml, has 91% sensitivity and up to a 99% negative-predictive value for AMI within one hour of ED presentation (approximately three to four hours after symptom onset).22 Similar to CK-MB and the cardiac troponins, an elevated myoglobin predicted an increased risk of adverse cardiovascular events and identified some high-risk patients not otherwise identified by clinical characteristics, CK-MB, or cTnT.23 The main advantage of myoglobin is early detection of patients with AMI. The disadvantage is that it has poor specificity for AMI in patients with concurrent trauma or renal failure. When used in appropriately selected patients, these issues are not a real clinical problem.

Most commonly, both CK-MB and troponin are either both elevated or both negative, facilitating diagnosis. However, on occasion, they can be discordant. When the CK-MB is elevated in the absence of a cTnI elevation, it is most often a false positive CK-MB. When one of the cardiac troponins is elevated in the absence of a CK-MB elevation, it is usually a delayed presentation reflecting the longer time period of troponin elevations than for CK-MB. Patients presenting very early (less than two to three hours after symptom onset) may have elevations in myoglobin in the absence of CK-MB or troponin elevations. Most typically, discordant results are helpful to the clinician because they identify a high-risk patient who could have been missed had only one marker been tested.

Markers that Do Not Require Myocardial Cell Death for Release

CK-MB, cardiac troponins, and myoglobin are only released after cellular injury. B-type natriuretic peptide (BNP) is a neurohormone secreted from the cardiac ventricles as a response to pressure or volume overload of the ventricle. BNP, an established marker for patients with heart failure, is also elevated in patients with ACS and can identify ACS patients who are at higher risk for adverse cardiovascular events, heart failure, or death.24-28 The utility of BNP as a diagnostic marker for ACS is based on the premise that, early after the onset of ischemia, impaired diastolic (and often systolic) function occurs with subsequent increases in left ventricular pressure and volume overload, potentially resulting in release of BNP. As the half-life of BNP is approximately 20 minutes, dynamic changes in BNP can occur rapidly. This suggests that BNP may provide important diagnostic and prognostic information in patients with potential ACS.

A novel approach to integrating multiple cardiac markers is being developed. A mathematical algorithm whereby the results of four cardiac markers (CK-MB, troponin I, myoglobin, and BNP) are integrated into one index has been developed. This multimarker index has improved performance for detection of AMI on the initial sample relative to the same individual markers and a composite of the same four markers using traditional thresholds. This can be best assessed by an evaluation of the receiver operator characteristic (ROC) curves or quantification of the area under the curve (AUC). A large AUC means the test being assessed is a better diagnostic test. If the area is 1.0, the test has both 100% sensitivity and 100% specificity and represents an ideal test. The closer the AUC is to 1.0, the better the test is.

Table 2 shows the area under the curve for the multimarker index relative to individual markers at the time of ED presentation. Compared with a composite of the same four individual markers, the multimarker index had significantly better specificity, likelihood ratio positive, and positive predictive value, while being similar on other performance characteristics (see Table 3).32 Therefore, the use of multimarker panels may improve the ability of clinicians to make decisions earlier during the evaluation period. Ôûá 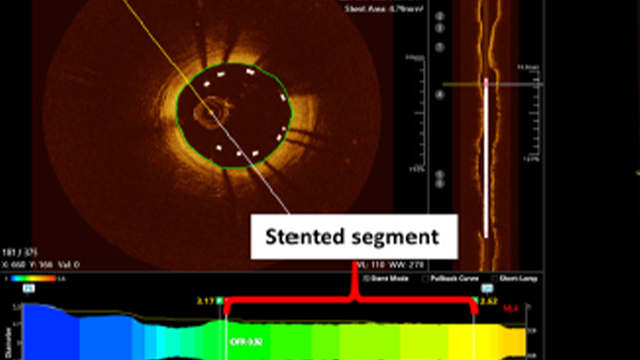