Severe aortic stenosis (AS) causes chronic pressure overload of the left ventricle (LV), resulting in progressive cardiac change that can extend beyond the LV. A new AS staging classification has been recently proposed encompassing the extent of cardiac changes in AS. The AS staging classification has important prognostic implications for clinical outcomes after aortic valve replacement. This article introduces the AS staging system and demonstrates the association of the extent of cardiac change with outcomes after transcatheter aortic valve replacement.

Degenerative calcific aortic stenosis (AS) is one of the most common valvular heart diseases, affecting >3% of those aged >65 years in the West.1 As a result of an aging population, the prevalence of AS is expected to increase. Severe AS causes chronic pressure overload of the left ventricle (LV), resulting in LV hypertrophy (LVH), diastolic dysfunction, an increase in the size of the left atrium, development of mitral and tricuspid regurgitation, and an increase in pulmonary artery pressure.2 AS is characterized not only by a restriction of aortic valve opening, but also by progressive myocardial changes that can sometimes extend beyond the LV.

A new staging classification system characterizing the extent of cardiac changes was recently proposed by Généreux et al. for patients with severe AS undergoing surgical or transcatheter aortic valve replacement (AVR) as part of the Placement of AoRTic TraNscathetER Valves (PARTNER 2) trial.3 As the number of transcatheter (TAVR) procedures continues to grow, it will be important to determinate whether prior findings can be replicated and validated in the real-world cohort of patients who have received TAVR. We hypothesized that AS staging would be associated with 2-year all-cause mortality and post-TAVR hospitalization. This review introduces the AS classification system and demonstrates the association between the extent of cardiac changes and outcomes after TAVR using a large and homogeneous cohort of patients with severe AS who received TAVR.

The pathophysiologic process of severe AS has both valvular and extravalvular involvement. Previous studies have clearly shown that the presence of extravalvular cardiac changes are prognostic in patients with severe AS.4–7 However, the indications for AVR in patients with AS remain primarily centered on the severity of AS, the symptoms related to AS, and reduced LV systolic function, defined by LV ejection fraction (LVEF) <50%.8–10 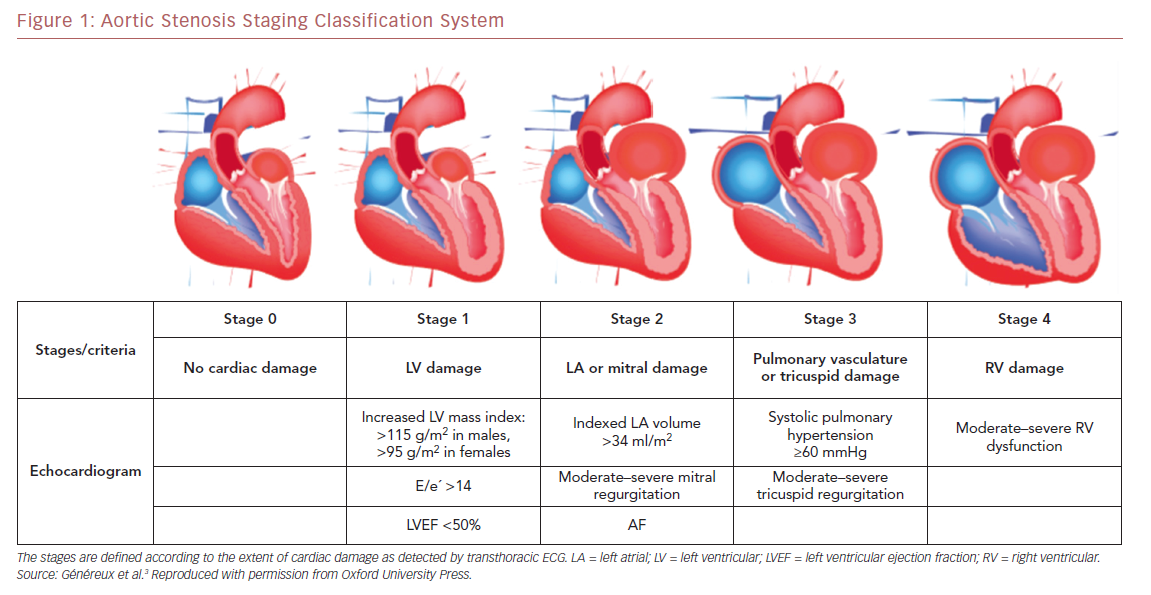 Using a cohort of 1,661 trial patients with comprehensive echocardiographic assessment before AVR, Généreux et al. demonstrated that there is a strong association between the newly proposed anatomic and functional cardiac damage staging system and 1-year mortality in patients receiving either surgical AVR or TAVR.3 For each stage increment, 1-year mortality risk increased by approximately 45%. Even after adjusting for several well-established predictors of worse outcomes after AVR, including patient frailty and the Society of Thoracic Surgeons Predicted Risk of Mortality (STS-PROM) score, the association with 1-year mortality remained significant.

Association of the Aortic Stenosis Staging System With Outcomes After TAVR

We sought to confirm the reproducibility of the proposed AS staging system (by applying the same proposed classification into a separate homogeneous cohort of patients who received TAVR from another institution), particularly in patients who had undergone TAVR. TAVR has become a breakthrough therapeutic advance in the treatment of symptomatic patients with severe AS classified as being at intermediate, high, and extreme surgical risk.11,12 In the US and many other countries, TAVR has become the most common method for aortic valve replacement. Furthermore, TAVR has been confirmed as safe in low-risk patients with symptomatic severe AS with regard to short-term outcomes.13 Given the potential expansion of TAVR into the lower (surgical) risk cohort and an increasing aging population, TAVR rates are expected to increase. However, other important risk factors, such as the presence of concomitant mitral or tricuspid regurgitation, pulmonary hypertension, and right ventricular dysfunction, may not be entirely correlated with AVR. Thus, it is important to have better ways to identify patients suitable for AVR and to evaluate risk stratification in patients with severe AS.

Using a large and homogeneous cohort of patients with symptomatic severe AS who had undergone TAVR within a large, integrated healthcare system, we sought to expand prior findings by performing survival analysis up to 2 years after TAVR and evaluating the association between AS staging and both cardiac and non-cardiac post-TAVR readmissions. In all, 689 patients were included in the final analysis (351 [50.9%] men; mean [±SD] age 82.4 ± 7.6 years; mean STS-PROM score 8.2 ± 4.7%). Of the 689 patients, 13%, 62%, 21%, and 4% were classified as stage 1, 2, 3, and 4, respectively. These results are similar to those reported by Généreux et al.3 Mean patient age, the prevalence of hypertension, and STS-PROM scores increased from stage 1 to 3, but decreased in stage 4 patients (Table 1). In terms of the ECG characteristics used for the staging classification, patients in stages 3 and 4 had the worst findings (i.e. greater LV mass index, worse LVEF, and concomitant valvular disease). Of note, the prevalence of LV and then right ventricular dysfunction (typically a late finding in severe AS) increased with worsening AS stage. Pulmonary artery systolic pressure increased from stage 1 to 3, but decreased in stage 4, likely due to right ventricular dysfunction and significant valvular disease. The prevalence of low-flow, low-gradient AS (known as a higher-risk phenotype) increased from stage 1 through to 4. 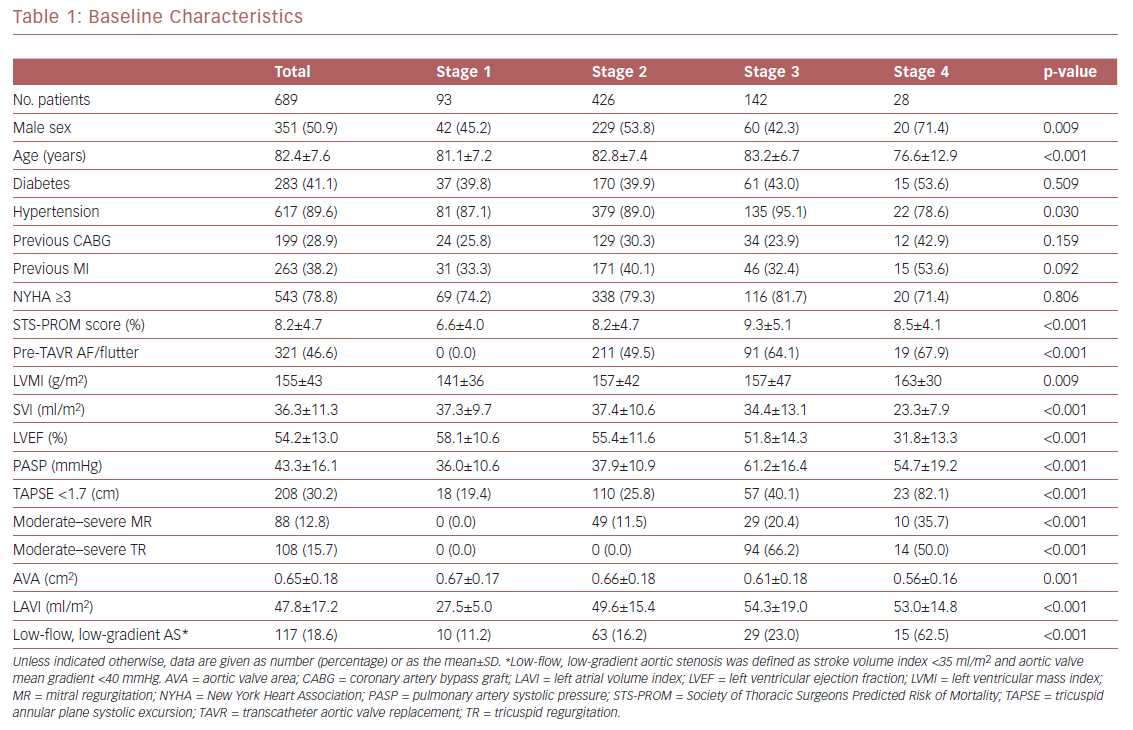 Kaplan–Meier analysis revealed a strong graded association between the AS staging system and all-cause mortality up to 2 years follow-up (Figure 2A), which extends the original observations reported by Généreux et al.3 This separation persisted even after adjustment for the STS-PROM score (Figure 3A), with an increased HR for all-cause mortality at each stage (Table 2). That is, AS patients presenting with stage 4 (significant right ventricular dysfunction) had the highest risk of mortality after undergoing TAVR, followed by stage 3 patients, whereas stage 2 AS patients did not have a significantly greater risk than those in stage 1. 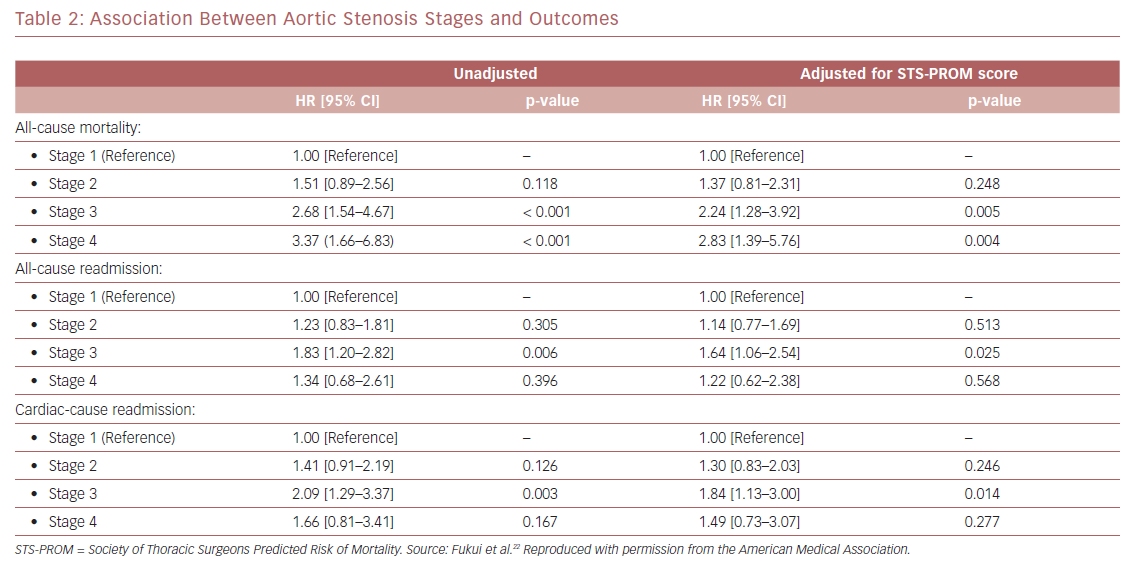 Another important finding of our analysis is the association of AS staging with the post-TAVR readmission rate for either any cause or cardiac causes (Table 2). Stage 3 patients who presented with significant pulmonary hypertension or tricuspid valvular damage not only had a higher mortality risk, but were also at higher risk of composite outcomes of all-cause death and readmissions for any cause (Figure 2B) or cardiac causes (Figure 2C). Even after adjustment for STS-PROM scores, the extent of cardiac changes captured by the staging system was associated with the composite outcomes (Figure 3B and 3C).

The findings of the present study support those reported by Généreux et al. by showing that the results of the staging system are reproducible and prognostically sound in an independent cohort of patients who underwent TAVR.3 In addition, we expand on the findings of Généreux et al. by showing that the association of AS staging with all-cause mortality persists up to 2 years of follow-up, and by demonstrating the association between AS staging and post-TAVR readmission rates in real-world patients with symptomatic severe AS who underwent TAVR.

Although this newly proposed staging classification would offer considerable advantages in terms of patient selection for AVR, the present study has some limitations. First, although risk factors such as concomitant valvular disease, pulmonary hypertension, and RV dysfunction are known to be important for patients presenting with symptomatic severe AS, both the present study and the study of Généreux et al. are retrospective studies, whereby the classification system was not used as part of the original decision-making process.3 Second, the cardiac damage proposed at each stage is not progressive and/or not necessarily a direct result of severe AS. Rather, the classification reflects the presence of other comorbidities in addition to severe AS. For example, in a stage 1 patient with severe AS (LV damage, LVEF <50%) may be related to coexisting coronary artery disease, or those in a stage 2 patient (severe AS plus mitral regurgitation plus left atrial dilation) could be related to primary mitral regurgitation with flail mitral leaflet. This newly proposed staging classification is about risk stratification of other coexisting comorbidities, and not a pathophysiological explanation of AS progression. Third, a more detailed classification between stages 0 and 1 is needed. Although reduced LVEF (<50%) is one of the classification criteria for stage 1 and an indication for AVR in patients with severe AS because of its relationship with poor outcome,14–16 LVEF alone is not sufficient to detect myocardial dysfunction at early stages of AS. Indeed, LVEF does not improve in some patients, despite AVR, and adversely affects mortality. Fourth, we have only investigated the classification system using baseline parameters. It is possible that staging changes in patients, and post-TAVR staging could be equally important. More data are needed to clarify this point.

In patients with severe AS despite normal LVEF, subclinical myocardial dysfunction detected by ECG-derived global longitudinal strain is very common and can be associated with poor outcomes.14,17 In addition, the presence of myocardial fibrosis identified by cardiac MRI has been shown to be independently associated with mortality in patients with AS despite preserved LVEF.18–21 These parameters could expand and potentially improve the proposed AS staging system, but are not currently incorporated into the routine clinical assessment of such patients.

The newly proposed staging system could also be particularity important for follow-up care after TAVR. Specifically, patients presenting in stages 3 or 4 may still derive symptomatic benefit from aortic valve intervention, but this benefit could be reduced by the presence of other comorbidities that may increase mortality risks and readmission rates. Such patients may require close follow-up care, and continued surveillance of their pulmonary hypertension, tricuspid regurgitation, and right ventricular dysfunction.

With the potential expansion of TAVR into lower risk and asymptomatic cohorts, the burden of extracardiac comorbidities and frailty may be lessened, thus emphasizing the importance of comprehensive anatomical and functional evaluation of cardiac changes before AVR. Although TAVR may be the correct choice in many patients, those with concomitant regurgitant valve lesions could derive benefit from simultaneous surgical correction.

The newly proposed staging classification system demonstrates a strong and graded association of the extent of cardiac change with mortality and readmission rate in patients with severe AS after AVR. In addition, patients with baseline moderate-to-severe pulmonary hypertension and/or significant tricuspid regurgitation have higher post-TAVR readmission rates for both cardiac and non-cardiac causes.

Inclusion of this staging system should be considered in the development of future TAVR risk stratification models and for shared decision-making. Further studies are required to prospectively validate this classification system.