Premature ventricular complexes (PVCs) in the absence of underlying structural heart disease are often benign. Most patients with this type of disease have an uneventful clinical course and can be treated based on symptoms. However, there exists a subset of patients with frequent PVCs that may develop cardiomyopathy and heart failure. This review describes the mechanisms and potential adverse effects of frequent PVCs, the prognosis and risk stratification of patients based on the nature and quantity of PVCs, and the clinical management and outcomes of these patients.

Disclosure:The author has no conflict of interest to declare.

Premature ventricular complexes (PVCs) in the absence of underlying structural heart disease have long been viewed as benign. Early studies with small population sizes and limited cardiac testing suggested that long-term prognosis in patients with idiopathic PVCs is similar to those in patients without other cardiac disease, and treatment was consequently limited to provide symptomatic improvement. While most patients with infrequent or moderate idiopathic PVCs have benign outcomes and can be managed based on symptoms, there exists a subset of patients with frequent PVCs that may develop cardiomyopathy and heart failure. Due to its rare occurrence, the nature and predictability of PVCs causing sudden cardiac death (SCD) is not well described and risk stratification and management of such patients remains a challenge. In this review, I first describe the mechanisms and potential adverse effects of frequent PVCs with a focus on the development of cardiomyopathy. I will subsequently discuss prognosis and risk stratification in patients based on the nature and quantity of PVCs. Finally, I will describe clinical management and outcomes.

The prevalence of PVCs in the population inherently depends on the type and duration of screening. In a study of 122,043 men in the United States Air Force monitored by EKG for 48 s, <1 % were noted to have PVCs.1 When monitoring was extended to 6 h in 301 men, 62 % had PVCs.2 A PVC burden of >60/h was reported in 1–4 % of the general population.3 The natural history of PVCs is incompletely understood and it is not clear why some patients have spontaneous resolution or improvement in PVCs, others have maintenance of their PVC burden without compromise of cardiac function, and others develop cardiomyopathy and heart failure even with similar PVC burdens or origins.

Initiation of PVCs can be due to any of the three primary arrhythmia mechanisms: re-entry, automaticity, or triggered activity. The autonomic nervous system also plays a significant role, and can affect PVC genesis due to automaticity or triggered activity in particular. Increased sympathetic tone can enhance automaticity in an ectopic focus or induce cAMP-mediated triggered activity.4 Vagal activity has been suggested to potentially facilitate early afterdepolarizations that can lead to increased ventricular arrhythmias.5 The influence of the autonomic nervous system was demonstrated in a recent analysis where idiopathic PVCs were identified as being either bradycardia or tachycardia dependent in 80 % of patients.5 This is evident in the variability of clinical presentation where some patients have exertional ventricular arrhythmia whereas others experience a higher PVC burden at rest. Treatment options are also affected, with patients demonstrating tachycardia-dependent PVCs being more likely to respond to sympatholytic therapies such as beta blockers.5

The prognosis in patients with frequent PVCs is affected by the presence of underlying cardiac disease. In patients with a recent myocardial infarction, the presence of frequent PVCs is associated with worse outcomes, including increased mortality.6 In these patients, based on failure to improve outcomes with attempts at PVC suppression,7 it is suspected that PVCs likely serve more as a marker of the severity of underlying disease rather than a modifiable risk factor.

The occurrence of SCD in patients with idiopathic PVCs is low, although difficult to quantitate due to its rarity. Patients with such a presentation should be screened for occult cardiac disease such as sarcoidosis or arrhythmogenic right ventricular dysplasia. When PVCs are documented to trigger sustained ventricular arrhythymias, ablation may be effective in eliminating or reducing the PVCs and subsequent arrhythmias.16 When polymorphic ventricular tachycardia or ventricular fibrillation is documented, an ICD is also indicated.17 In other patients, the decision to implant an ICD should consider various clinical parameters including documentation of clinical ventricular tachycardia, left ventricular function, inducibility of ventricular tachycardia during electrophysiology study, success of catheter ablation, and presence of structural heart disease by advanced imaging.

The two most common indications for therapy to reduce or eliminate PVCs are symptomatic improvement and reversal of a cardiomyopathy.17 Symptoms can vary greatly and be a result of individual PVCs or the cumulative hemodynamic effect of frequent PVCs. Symptoms from individual PVCs can be from the PVCs themselves, a following compensatory pause, or a subsequent hypercontractile beat. These symptoms can include palpitations, chest pain, dyspnea, and lightheadedness. When symptoms are due to the cumulative hemodynamic effect of frequent PVCs, they can range from mild fatigue or dyspnea with exertion to significant heart failure with or without left ventricular dysfunction. Less common scenarios where PVC elimination may be pursued include PVCs limiting adequate biventricular pacing in patients with cardiac resynchronization therapy and patients in whom PVCs are implicated in triggering sustained ventricular arrhythmias.

In patients with frequent symptoms or frequent PVCs noted by 12-lead EKG, initial workup should include a 24–48-h Holter monitor and an echocardiogram. EKG monitoring can provide symptom correlation and identify PVC frequency. Twelve-lead Holter monitors are particularly useful in identifying the number of PVC foci. An echocardiogram should be used to evaluate ventricular function and dimensions as well as search for any other structural abnormalities. An initial search for secondary etiologies should be pursued and PVCs secondary to other cardiac or metabolic abnormalities may be reduced or eliminated with therapy addressing the underlying cause. Patients with symptoms on exertion should also have an exercise stress test including 12-lead EKG analysis. A positive stress test or symptoms consistent with ischemia, particularly in a patient with coronary risk factors, may prompt a coronary angiogram. While there are no specific criteria for obtaining a cardiac MRI, these are often obtained when it is necessary to further evaluate abnormalities detected on echocardiogram or in patients where symptoms or other findings suggest the potential presence of structural abnormalities not definitively evaluated by echocardiogram.

There is little data on the appropriate management of asymptomatic patients with very frequent PVCs (>10–20 %) without evidence of ventricular dysfunction or dilation. These patients are at risk for future development of cardiomyopathy, but whether prophylactic therapy is warranted is not clear. At a minimum, these patients should be followed regularly with periodic assessment of cardiac function.

Many patients with symptomatic PVCs without structural heart disease can be initially managed by their primary care physician. When advanced therapy such as antiarrhythmics or catheter ablation is necessary, or the presence of cardiomyopathy or other structural heart disease is present or suspected, referral to a cardiologist or cardiac electrophysiologist is appropriate.

When behavioral triggers are identified, initial management may include an attempt to limit or eliminate these triggers. Although most patients do not experience a significant PVC reduction with behavioral modification such as reducing moderate caffeine, alcohol, or tobacco consumption,18,19 the secondary benefits of lifestyle modification can justify this as an initial strategy.

Initial pharmacotherapy for idiopathic PVCs usually consists of beta blockers or calcium channel blockers.17 The overall efficacy of these agents in eliminating PVCs is poor, with reported rates of 10–24 %;20–22 however, additional patients can experience an alleviation of symptoms even without significant PVC elimination. Despite the low efficacy, beta blockers and calcium channel blockers remain the most common initial treatment modalities as risks with these medications are generally low. Beta blockers may also be indicated in patients with evidence of cardiomyopathy.

Antiarrhythmic drugs to treat PVCs are more effective than beta blockers or calcium channel blockers, with a reported decease in PVC frequency and associated symptoms in 15–65 % of patients.20,23,24 Although efficacy is improved, this must be weighed against the potential risks and side effects of long-term exposure to antiarrhythmic medication. Antiarrhythmic therapy remains a useful option for patients refractory to other pharmacologic treatment, particularly those that are not ideal ablation candidates or have a preference for medical therapy.

In appropriate patients, catheter ablation can offer the highest efficacy in the management of frequent PVCs. Factors that may favor attempts at ablation include a high frequency of PVCs, limited PVC foci, and favorable PVC locations. Ablation may be the preferred approach in patients with PVC-induced cardiomyopathy given the robust data showing favorable outcomes in these patients following ablation.

In one large-scale multicenter study, 1,185 patients referred for catheter ablation of frequent PVCs had a single procedural success rate of 84 %. Following an average of 1.3 ablations, 73 % of patients remained off antiarrhythmic drugs and maintained at least an 80 % PVC reduction at a mean follow-up of 1.9 years (Figure 1).15 Factors associated with a greater likelihood of success included right ventricular outflow tract origin and fewer PVC foci. The overall major complication rate in that study was 2.4 %, with access-related complications being the most common, and no procedural mortality observed. 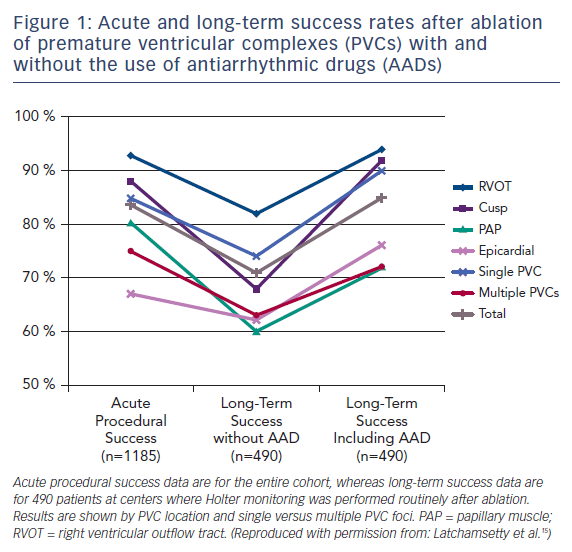 Most patients with PVCs in the absence of structural heart disease have a benign clinical course and can be treated based on symptoms. Patients with frequent idiopathic PVCs are at a higher risk for development of cardiomyopathy and heart failure. Treatment modalities to eliminate or reduce PVC burden include pharmacotherapy and catheter ablation. In the case of PVC-induced cardiomyopathy, successful PVC elimination by ablation usually normalizes or significantly improves cardiac function. In asymptomatic patients with very frequent PVCs and preserved cardiac function, regular follow-up and monitoring of cardiac function is warranted.