Complex percutaneous coronary intervention (PCI) patients are a high-risk population for ischemic complications. Antiplatelet therapy in such patients remains controversial, as the beneficial effects of the use of more potent agents or prolonged dual antiplatelet treatment (DAPT) on atherothrombotic complications are hindered by a concomitant increase in bleeding rates. The aim of this article is to describe ischemic and bleeding outcomes associated with complex PCI procedures and to compare different types and durations of DAPT regimens in terms of safety and efficacy outcomes. Issues concerning special patient groups, such as those with left main, chronic total occlusion, or bifurcation lesions, are discussed.

Complex percutaneous coronary intervention (PCI) usually refers to procedures that include bifurcation with two stents implanted, the treatment of three or more lesions, the implantation of three or more stents, total stent length >60 mm, or a chronic total occlusion (CTO).1 However, as there is no universal definition, other features, such as left main (LM) or proximal left anterior descending (LAD) lesions, bifurcation, vein bypass graft PCI, lesion length ≥30 mm, rotational atherectomy use for severely calcified lesions, or thrombus-containing lesions, have also been considered as additional components of complex PCI in various studies.2–4 The presence of complex PCI features, which have become increasingly frequent during the past decade, has been associated with a higher rate of major adverse cardiovascular events (MACE).5–9 However, the type and duration of dual antiplatelet therapy (DAPT) in patients undergoing PCI vary, as clinical settings, patient characteristics, as well as various risk factors, can affect decision-making.1 Although a prolonged DAPT regimen may be beneficial for reducing ischemic risk associated with complex PCI, the fact that these patients may be at an increased risk of bleeding raises concerns about associated bleeding complications.2 In this article, we focus on antiplatelet use in a high-risk subset of patients with complex PCI.

Several studies support the notion that patients with complex PCI features are at a high risk for ischemic complications.7–9 The Assessment of Dual Antiplatelet Therapy with Drug-Eluting Stents (ADAPT-DES) study evaluated the outcomes of patients undergoing PCI according to disease extent and complexity, and concluded that patients had a higher 2-year risk of MACE (adjusted HR 1.56, 95% CI [1.29–1.89], p<0.0001), which was progressively greater as the number of complex PCI features increased. A higher risk of stent thrombosis (ST), MI, ischemia-driven revascularization, as well as major bleeding, has been described in complex PCI patients.2 A core laboratory analysis of 10,854 patients in the Cangrelor versus standard therapy to AcHieve optimal Management of Platelet InhibitiON PHOENIX (CHAMPION-PHOENIX) trial reported a MACE rate (composite of death, MI, ischemia-driven revascularization, or ST) of 2.5%, 4.1%, 6.5%, and 7.5% at 48 hours in patients with no, one, two, or three or more complex PCI features, respectively (p<0.0001), whereas the presence of complex PCI features was not associated with major bleeding events. Notably, a 21% reduction in the MACE rate at 48 hours was noted with the use of potent intravenous P2Y12 inhibitor, cangrelor, compared to clopidogrel, irrespective of target lesion complexity (p=0.46 for interaction), whereas the absolute reduction in the ST rate at 48 hours was particularly higher in patients with three or more complex PCI features (OR 0.43, 95% CI [0.23–0.82]).10 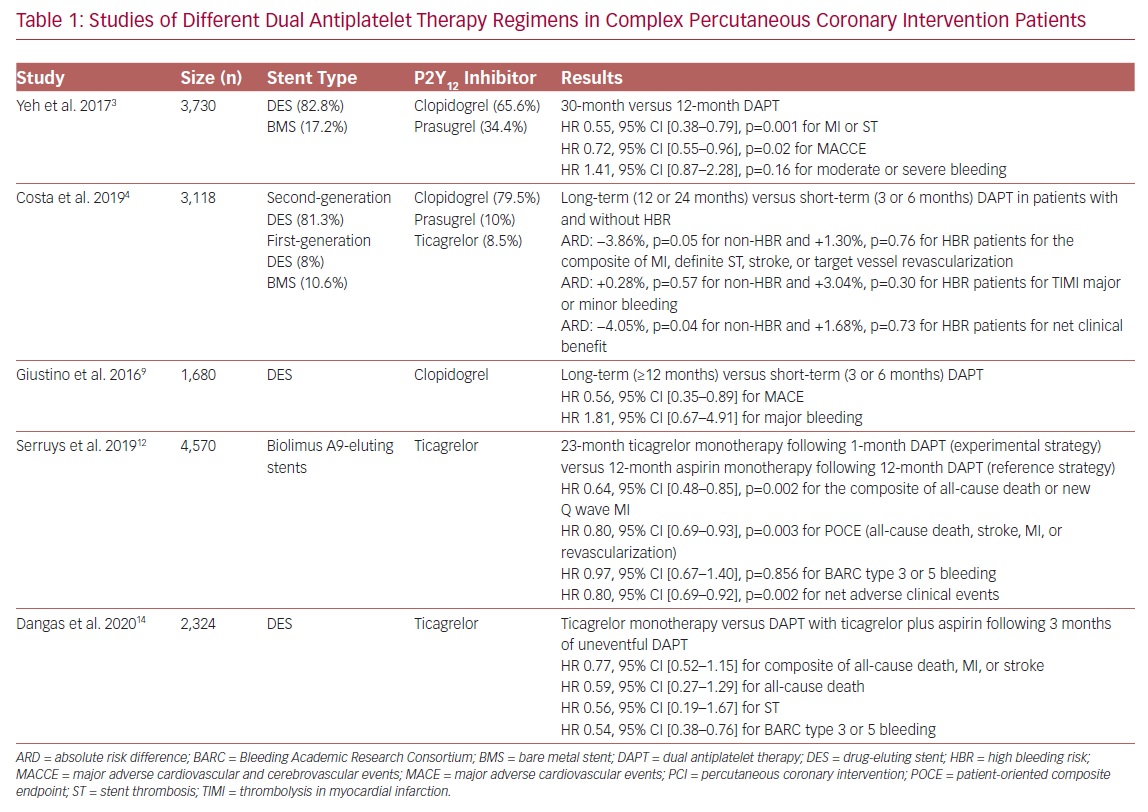 In their study of 14,963 patients from eight randomized trials, Costa et al. incorporated both angiographic and clinical high-risk features, such as high bleeding risk (HBR) status (PREdicting bleeding Complications in patients undergoing stent Implantation and SubsequEnt DAPT [PRECISE-DAPT] score ≥25), and concluded that complex PCI patients had a greater risk of the composite endpoint of MI, definite ST, stroke, or target vessel revascularization compared to non-complex PCI patients (p<0.0001), irrespective of HBR status.4 The majority of patients (79.5%) received clopidogrel, whereas 10% and 8.5% received prasugrel and ticagrelor, respectively. Most patients (81.3%) had a second-generation DES implanted, 8% had a first-generation DES implanted, and 10.6% had a BMS implanted. Prolonged DAPT (12 or 24 months) reduced ischemic events without increasing the rate of bleeding in non-HBR complex PCI patients, whereas complex PCI was not found to significantly increase bleeding events. The co-existence of complex PCI features and acute coronary syndrome (ACS) among non-HBR patients identified a cohort obtaining particular benefit with prolonged DAPT.4

The recently published Ticagrelor With aspIrin or aLone In hiGH-risk paTients after COMPLEX percutaneous coronary intervention (TWILIGHT-COMPLEX) study is a post-hoc analysis of the TWILIGHT trial, which included 2,342 patients undergoing complex PCI. It evaluated the effects of ticagrelor monotherapy compared to ticagrelor plus aspirin in patients who had completed 3 months of uneventful DAPT treatment. The results showed that, following the ticagrelor monotherapy regimen, patients were less likely to have a clinically relevant bleeding BARC type 2, 3, or 5 during the follow-up period of 1 year (4.2% versus 7.7%, absolute risk difference: –3.5%, HR 0.54, 95% CI [0.38–0.76]), whereas severe or fatal bleeding (i.e. BARC types 3 and 5) rates were also significantly reduced in the ticagrelor monotherapy compared to ticagrelor plus aspirin arm (1.1% versus 2.6%, absolute risk difference: −1.5%, HR 0.41, 95% CI [0.21–0.80]). There were no statistically significant differences in ischemic endpoints, such as the composite of death, MI, stroke (3.8% versus 4.9%, absolute risk difference −1.1%, HR 0.77, 95% CI [0.52–1.15]), or ST (0.4% versus 0.8%, absolute risk difference −0.4%, HR: 0.56, 95% CI [0.19–1.67]) between the two groups. The sensitivity analysis found that the benefit of bleeding risk reduction associated with ticagrelor monotherapy regimen was consistent across all individual subgroups of complex PCI (three or more lesions treated, three vessels treated, stent length >60 mm, bifurcation with two stents implanted, use of atherectomy device, LM PCI, surgical bypass graft, or chronic total occlusion).14

In brief, prolonged DAPT is beneficial for the prevention of ischemic events, but has a potentially higher bleeding risk in patients undergoing complex PCI. Nevertheless, in cases where bleeding prevention is essential, early de-escalation of DAPT to long-term ticagrelor monotherapy could be an alternative strategy, and has been shown to reduce bleeding events without significantly compromising efficacy.

Antiplatelet Use in Bifurcation, LM, and CTO PCI

Bifurcation and LM lesions, as well as CTO interventions, are of particular interest (Table 2). In the COronary BIfurcation Stenting II registry, which included 2,082 patients with bifurcation PCI, prolonged DAPT (≥12 months) was associated with lower rates of all-cause death or MI compared to standard DAPT (<12 months) at 4 years post-PCI (adjusted HR 0.22, 95% CI [0.12–0.38], p<0.001). All patients were treated with a DES although, interestingly, patients in the prolonged DAPT group were more likely to have a second-generation DES implanted compared to patients in the standard DAPT group (14.4% versus 7.2%). Of note, the treatment effect of prolonged DAPT duration did not differ significantly based on the type of stent used.16

Of the 1,754 patients randomized to 6 or 24 months of DAPT with clopidogrel in the PRODIGY (PROlonging Dual antiplatelet treatment after Grading stent-induced Intimal hyperplasia) study, who were analyzed by LM or proximal LAD (pLAD) PCI, the rate of definite, probable, or possible ST in the 24-month DAPT group was significantly lower in patients with LM/pLAD lumen narrowing (HR 0.45, 95% CI [0.23–0.89], p=0.02), whereas it was higher in patients without LM/pLAD lumen narrowing (HR 2.15, 95% CI [1.01–4.58], p=0.046, p=0.002 for interaction), rendering the presence of LM/pLAD lumen narrowing as a possible treatment duration modifier. Of note, 26.8% and 26.2% of patients in the 24-month and 6-month DAPT groups, respectively, received a BMS; the remaining patients in each group were treated with a zotarolimus-, everolimus- or paclitaxel-eluting stent. However, although separate analysis regarding the effect of DAPT on ischemic outcomes for each stent subgroup was not performed, after excluding first-generation DES, the results remained similar with those observed in the overall population.17

In the Evaluation of XIENCE versus Coronary Artery Bypass Surgery for Effectiveness of Left Main Revascularization (EXCEL) trial, prolongation of DAPT beyond 12 months after PCI with everolimus-eluting stents in patients with LM disease did not result in improved event-free survival, with similar 1–3 year rates of death, MI, or stroke composite compared to standard DAPT duration (p=0.28). Of note, 72.9%, 18.5%, and 7% of patients in the EXCEL trial were discharged on clopidogrel, prasugrel, or ticagrelor, respectively, with corresponding rates of 67.8%, 17.8%, and 5.4% at 1 year, and 54.7%, 10%, and 2.9% at 3 years post-PCI.18 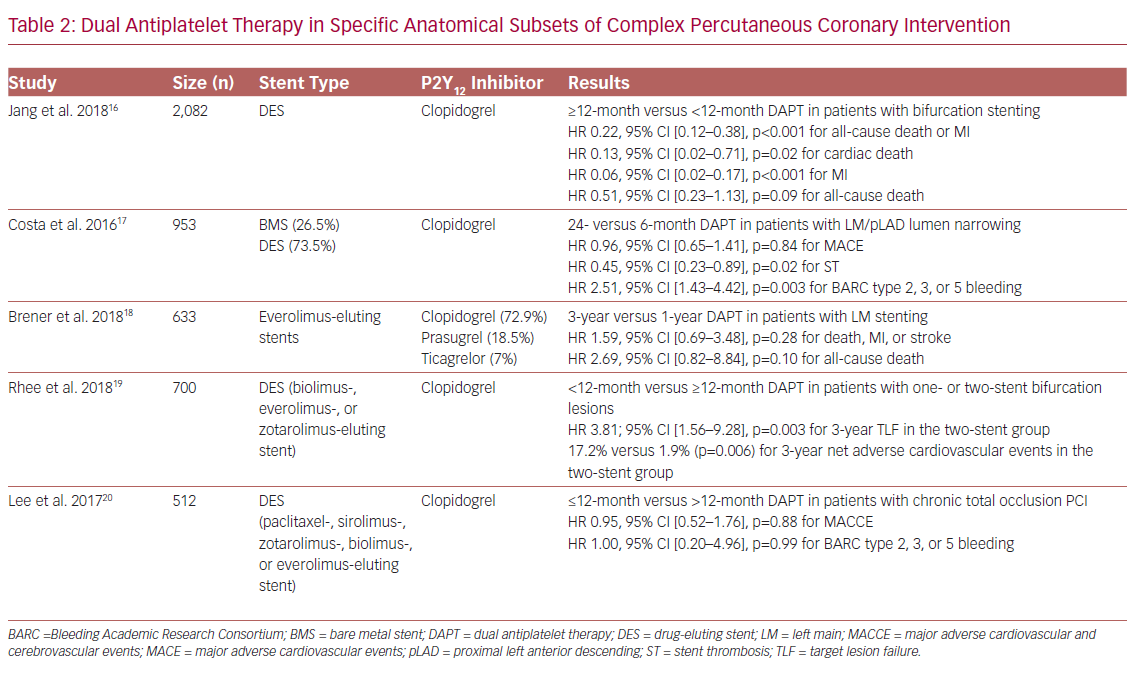 Prolonged DAPT with clopidogrel has been reported to be beneficial for patients following a two-stent strategy for LM bifurcation, as DAPT <12 months was associated with higher target lesion failure and thrombotic adverse cardiovascular events (TACE) rates in patients with a two-stent versus one-stent implantation strategy (p=0.001 and p=0.002, respectively), with no differences in bleeding outcomes between subgroups, indicating a positive net clinical benefit of prolonged DAPT in this subset of patients. Of note, patients were treated with biodegradable polymer-coated biolimus-, durable polymer-coated everolimus-, and durable polymer-coated zotarolimus-eluting stents, with similar rates between the different DAPT duration subgroups (p=0.633).19

Of the 512 retrospectively analyzed patients treated with PCI and DES implantation for CTO lesions, the rates of MACCE, as well as BARC type 2, 3, or 5 bleeding, were similar between the ≤12-month and >12-month DAPT groups (p=0.26 and p=0.72, respectively), whereas there were no significant interactions between baseline lesion or procedural characteristics and DAPT duration for MACCE. Interestingly, although in the prolonged DAPT group the rates of newer-generation stents were higher (25.6% versus 11.6% for everolimus-, 19.8% versus 14.6% for zotarolimus-, and 8.3% versus 7.5% for biolimus-eluting stents), there were no significant interactions between DAPT duration effect on MACCE and stent generation (p=0.41 for interaction).20

Heterogeneity in features used to define a complex PCI procedure significantly hinders comparison between studies and the DAPT regimens used (Table 3).1–4,9,12 This is further complicated by the fact that, apart from complex coronary anatomical features, comorbidities and/or hemodynamic compromise may co-exist and characterize a ‘complex PCI patient’ (Figure 1). Of importance, patients with complex coronary artery disease (CAD) are at an increased risk of adverse outcomes, even after the completion of a complex PCI procedure, depending on the residual ischemia burden, a factor that should be taken into consideration during the evaluation and comparison of trials’ efficacy outcomes.21

The American College of Cardiology/American Heart Association guidelines consider features, such as greater stent length or bifurcation lesions, as factors that elevate ischemic and ST risk, potentially advocating for a prolonged duration of DAPT,11 whereas the European Society of Cardiology (ESC) guidelines propose that prolonged DAPT (>6 months) may be considered (class IIb recommendation) for patients undergoing complex PCI.1 DAPT beyond 1 year is also discussed in the Canadian guidelines (weak recommendation, moderate-quality evidence), and concerns stable CAD patients with a low risk of bleeding undergoing complex PCI.22 Of note, the use of a potent P2Y12 inhibitor in complex PCI patients, which could provide an alternative strategy for ischemic risk reduction, has not been studied extensively, as most published studies have mainly used clopidogrel as part of DAPT.4,9,16–20

An analysis of the PROMETHEUS (a multicenter observational study comparing outcomes with prasugrel versus clopidogrel in ACS PCI patients) study, which compared prasugrel versus clopidogrel in 9,735 ACS patients undergoing complex PCI, showed that physicians hesitated to use potent P2Y12 inhibitors in high-risk situations; as procedural complexity increased, the prescription of prasugrel decreased.23 The recent 2018 ESC/European Association for Cardio-Thoracic Surgery guidelines on myocardial revascularization propose prasugrel or ticagrelor in high-risk elective PCI, such as LM stenting and CTO procedures (class IIb recommendation).24 Potent P2Y12 use in patients undergoing elective complex PCI is currently under evaluation in the ongoing SMART-ATTEMPT (Aspirin and a PoTent P2Y12 inhibitor versus aspirin and clopidogrel Therapy in Patients Undergoing Elective percutaneous coronary intervention for coMPlex lesion Treatment) trial (NCT04014803). 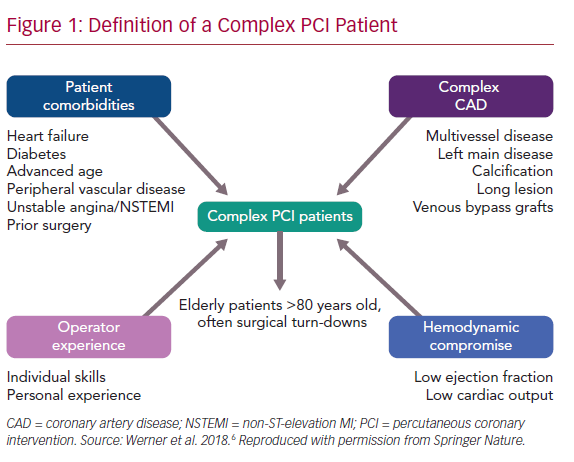 Complex PCI cases, as well as their associated risks, represent a common clinical scenario, indicating a need to identify optimal antiplatelet therapy that would benefit these high-risk patients. With the exception of the increased ischemic risks associated with procedural complexity, it is evident that the risk of bleeding plays an important role in tailoring both the type and the duration of antithrombotic regimen, and should guide treatment decision-making. The adoption of a universal definition of complex PCI and widely-used ischemic and bleeding scores may facilitate a comparison of study outcomes and the conduction of large randomized controlled trials investigating different DAPT strategies, as well as the use of alternative agents, such as potent P2Y12 inhibitors, in such patients.