Drug-eluting stents (DES) are the gold standard for percutaneous coronary interventions (PCI); however, technical and anatomical challenges need to be addressed to ensure optimal apposition and prevent late adverse events. Complex vessel anatomies, including ectatic or aneurysmatic vessels, or significant differences in diameter in left main stenosis of the coronary artery, are clinical indications in which current PCI techniques attempt to shape conventional DES to follow vessel anatomy, thus modifying the original stent scaffold and its properties. However, due to their design, balloon-expandable cobalt–chromium and cobalt–nickel DES have limitations regarding their expansion capacity, which can result in undersizing and malapposition. New stent scaffolds have recently been introduced into clinical practice to address these challenging anatomies, including a drug-eluting nitinol stent platform. The nature of the nitinol device allows conformability to the native vessel, covering complex anatomies without manual adaptation. In this article, the authors present the rationale and current data on self-apposing nitinol DES in left main stenosis, and suggest that the device may be safely and effectively used with comparable rates of adverse cardiovascular events, as seen with second-generation balloon-expandable DES.

Significant stenosis of the left main (LM) coronary artery is observed in 7% of coronary angiographies.1 Coronary artery bypass grafting has traditionally been the treatment of choice. In recent years, percutaneous coronary intervention (PCI) has evolved as an alternative, especially for low and intermediate SYNTAX score patients.2 However, during PCI of bifurcation lesions, approximately 50% of LM stenoses are associated with worse outcomes compared to ostial or mid-portion LM shaft lesion treatment.3 A particular technical challenge related to interventions of the distal LM stem is a major difference in diameter between the LM coronary artery and its branches (left anterior descending artery [LAD], left circumflex [LCX] artery, or intermediate branch). This can result either in oversizing the LM coronary artery in relation to the diameter of the distal branch, or in undersizing the LM coronary artery in which it was implanted, which can affect the distal reference diameter. The first is potentially associated with distal stent-edge dissection or perforation; the latter can result in malapposition of the stent. Both phenomena result in unfavorable angiographic and clinical outcomes.

This limitation has led to the development to various stent designs, and many materials have been tested in order to improve the physical properties of DES. One of these materials is nitinol, a nickel–titanium alloy, which has been used for many years for devices, such as those used for patent foramen ovale closure. Nitinol has memory properties that allow it to actively expand to a predetermined diameter at body temperature, including in a self-apposing manner (with the outward force to take the shape of the vessel). The device has the ability to match differing vessel diameters along the length of the vessel and to adapt to any changes in the vessel diameter over time; for example, resolution of vascular spasm or negative remodeling in the course of atherosclerosis.

Conventional balloon-expandable stent platforms do not have any expansion force, and their expansion and apposition are the result of deployment pressure and post-dilation. 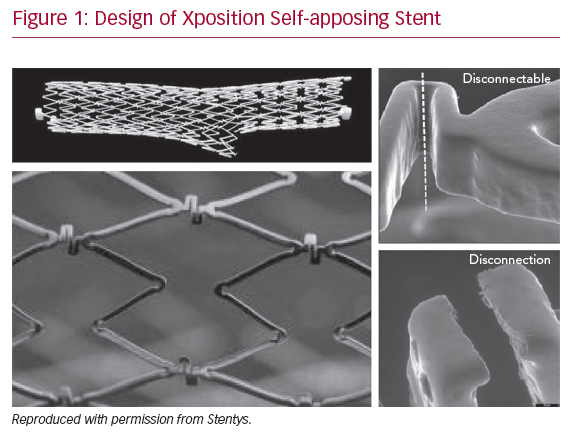 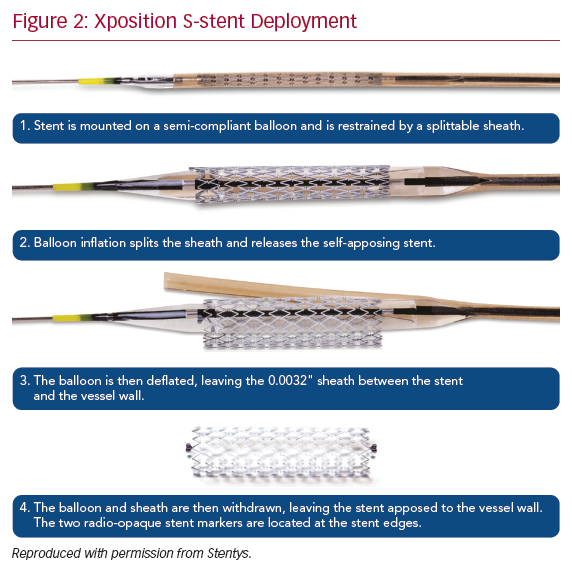 In contrast, self-apposing stents have an inherent expansion force that allows the stent to conform to the vessel diameter without the risk of overexpansion. The expansion force is relatively low and inadequate to replace meticulous lesion preparation. If there is insufficient in predilatation and post-dilatation of the lesion, there is a substantial risk of underexpansion of the stent, which, similar to conventional balloon-expandable stents, is a relevant factor for stent thrombosis (ST) and in-stent restenosis.

As the expansion force exponentially decreases as the stent diameter increases, it is crucial to select the proper stent size and avoid oversizing the device in order to ensure good apposition to the vessel wall.

Self-apposing stents can conform to the vessel, even in the presence of variance in vessel diameter and changes in vessel diameter over time. Self-apposing stents have shown more complete and continual apposition against the vessel wall than balloon-expandable stents.4 Stent strut malapposition has been found to be a key mechanism for acute and subacute ST.5 This ability to conform to varying diameters also reduces the need for the high pressure, oversized post-dilation, and the risk of subsequent dissection. In vessels with diameter variance, this means that all balloon dilations can focus on treating the lesion rather than on making the stent fit the vessel. In bifurcations, there is also no need to use the kissing balloon technique or the proximal optimization technique (POT) to ensure good apposition, simplifying the treatment of bifurcation lesions.6

Most of the available clinical data relate to a single device, the Xposition S self-apposing sirolimus-eluting stent (Stentys SA). The Xposition S stent is laser cut from a nitinol tube, with short Z-shaped rows of stent struts joined together with S-shaped connectors. These short-stent elements enable the stent to accurately conform to the vessel wall, whereas the S-shaped connecting elements are disconnectable to allow side-branch access, facilitating a provisional approach to bifurcation lesions. Disconnection is triggered by passing a balloon though the distal cell covering the ostium of the side-branch, and subsequent inflation of the balloon induces a rotational torque force that causes the elements to disconnect (Figure 1). However, proper balloon size selection is crucial to ensure good apposition of the disconnected element. Gold markers are embedded in paddles at either end of the stent, allowing accurate visualization of the stent once implanted. The stent is coated with a polymer of polysulfone that contains both the drug (1.4 µg/mm² sirolimus) and the excipient (polyvinylpyrrolidone), resulting in a highly biocompatible and non-thrombogenic surface.

The stent is compatible with a 6 Fr guiding catheter, and the current monorail delivery system makes it deployable by withdrawal of a retractable sheath. It is mounted onto a semi-compliant balloon. The stent is covered by a splittable sheath that keeps the stent compressed. When the balloon is inflated, the sheath is split, which results in stent release. The device is available in four lengths (17, 22, 27, and 37 mm) and three sizes 2.5–3.0 mm (small), 3.0–3.5 mm (medium), and 3.5–4.5 mm (large). The theoretical maximum diameter reached with the medium-sized device is 5 mm, and 6.5 mm with the large-sized device.

Predilatation is mandatory in every case prior to stent deployment. However, in the case of heavily calcified vessels, it is crucial that the lesion is prepared with high-pressure predilatation, cutting or scoring balloon, or atherectomy to achieve a diameter of <30% residual stenosis or a 2 mm lumen diameter. Poor lesion preparation will result in a higher retraction force upon withdrawal of the delivery system, and possible migration of the stent (Figure 2).

The device is positioned using the proximal and distal markers of the balloon; however, as the balloon expands 4 mm proximally to the marker, care should be taken to ensure the guide catheter is not covering this segment. The stent will deploy at approximately 8 atm, but inflation should always be at a minimum of 12 atm.

During delivery, the splittable sheath is trapped between the stent and the vessel wall; therefore, during withdrawal, care must be taken to avoid advancement of the guide catheter. To avoid interaction of the guiding catheter with the stent and sheath and a consecutive increase of retraction force or stent damage, it is strongly recommended that the guide catheter is withdrawn so that it is 2 cm from the proximal stent marker, and that this position is maintained.

As a self-apposing stent only has an expansion force to conform to the vessel, the use of post-dilatation with a non-compliant balloon is strongly recommended to ensure that the lesion is fully expanded.

In a propensity score analysis from the Self-apposing Stentys Stents Registry (SPARTA) and Failure in Left Main Study with Second-generation Stents – Cardiogroup III (FAILS-2) registries, 151 patients with LM coronary artery disease treated with the XPosition S device and 1,270 treated with second-generation balloon-expandable DES were included.7 No differences in the rate of major adverse cardiovascular events (MACE) rate at 250 days were observed (9.8% versus 11.5%, p=0.54). After propensity score matching, 129 patients treated with sirolimus-eluting stents and 258 patients with DES (approximately one-third were women) were compared. After a follow-up of 250 days, the MACE rate was not found to differ between the two groups (9.9% versus 8.5%, p=0.66), nor did the rate of LM target lesion revascularization (TLR; 1.6% versus 3.1%, p=0.36) and definite ST (0.8% versus 1.2%, p=0.78). These results were also consistent when controlling for treatment with provisional versus two-stent strategies for unprotected LM bifurcation.

The Clinical Study to Evaluate the STENTYS Xposition S for Treatment of Unprotected Left Main Coronary Artery Disease (TRUNC) study included 205 patients between June 2016 and July 2017 at 18 locations in Europe.9 Patients with a SYNTAX score >32 or recent ST-elevation MI were excluded. Distal LM stenosis was present in 92.7% of patients treated using the provisional approach (in 79.4% of cases). Remarkably, POT and kissing balloon inflation were performed in 56.3% and 26.6% cases, respectively. The target lesion failure rate, defined as a composite of cardiac death (2.4%), target vessel MI (3.9%), and TLR (7.3%), was 8.3% at 12 months and 11.7% at 24 months. Most TLR events were due to stenosis located in the side-branch, outside the XPosition S-stent location at the side-branch level (irrespective of the type of SB treatment during index procedure), which is commonly observed when treating coronary bifurcation lesions. Only one probable/subacute ST was reported (death of unknown cause within 30 days) with no late or very late ST event. The TRUNC study confirmed that the Xposition S self-apposing stent is a valid and feasible option for the treatment of LM coronary artery disease. Such results were reached without the systematic need of stent optimization techniques, focusing mainly on lesion treatment. 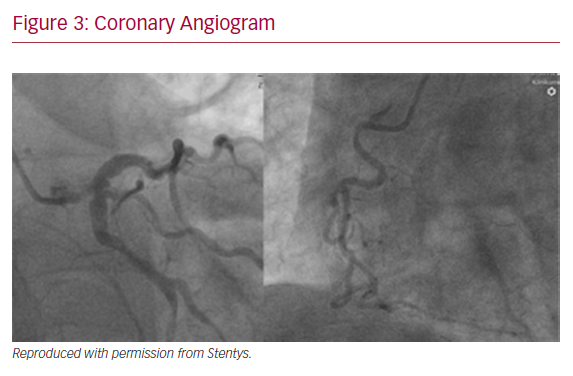 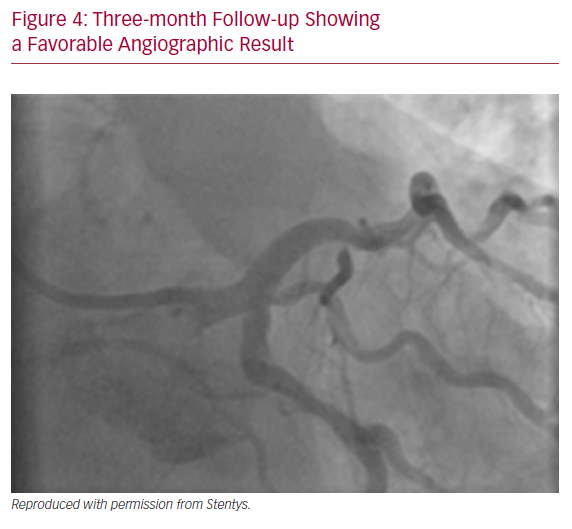 A 64-year-old male with previously diagnosed arterial hypertension and dyslipidemia was admitted to our emergency department with hypotonia, tachycardia, and angina at rest. ECG revealed ST-elevation in aVR, and ST-depression in leads I, aVL, and V2–V6. A coronary angiogram was immediately performed and showed subtotal stenosis of a relatively short LM coronary artery with the presence of general ectasia of the dominant left coronary system (Figure 3). After administration of dual antiplatelet therapy and tirofiban, both main branches of the left coronary artery were wired, and predilatation with a 3.0/12 mm balloon was performed. Because of difficulties in assessing the true lumen of the LM coronary artery due to thrombotic burden in the vessel and possible spasm related to cardiogenic shock with vasopressor therapy, we decided to implant a Stentys X-Position S 22 mm long stent (large size) from the LM coronary artery to the LAD. After rewiring the LCX artery, the stent cell was opened with a 3.0/12 mm balloon, and post-dilation of the LM coronary artery (POT) was performed. The patient was scheduled for elective re-angiography with optical coherence tomography (OCT) 3 months later. OCT revealed good apposition and endothelization of the implanted device (Figures 4 and 5). Dual antiplatelet therapy was continued for 12 months after initial PCI. 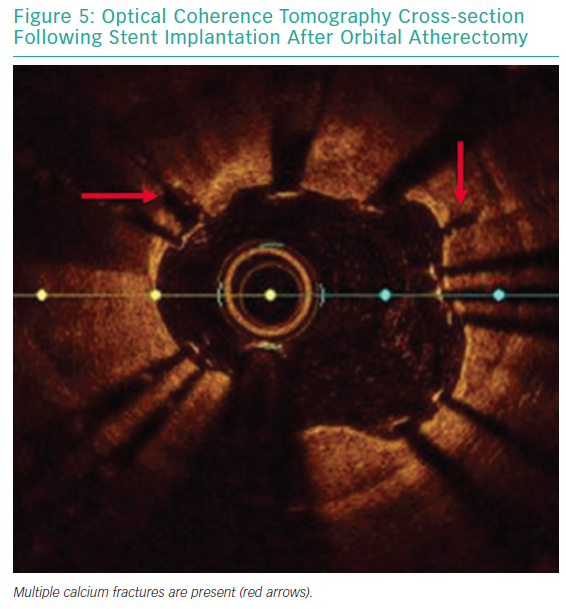 Self-apposing stents are a new option for the treatment of LM disease in clinical practice when vessel anatomy requires a stent that is able to adapt to the fractal geometry of the vessel. However, it should be stressed that the low expansion force of the device requires meticulous lesion preparation. Similar to conventional balloon-expandable stents, the use of intravascular imaging is encouraged to detect possible underexpansion of the device or residual stenosis of untreated side-branches when a provisional strategy has been chosen.