Secondary mitral regurgitation (MR) is common in patients with left heart dysfunction and it is associated with poor outcomes. Findings from the Cardiovascular Outcomes Assessment of the MitraClip Percutaneous Therapy for Heart Failure Patients with Functional Mitral Regurgitation (COAPT) trial, published in 2018, suggest that in a subset of people with heart failure with secondary MR that persists despite optimization of guidelinedirected medical therapies, there is now a role for percutaneous mitral valve repair using the MitraClip device. Defining which patients are most likely to benefit from MitraClip, and when, requires both a multidisciplinary approach centered on heart failure, as well as a recognition of the need for further research in this area.

Mitral regurgitation (MR) is common in industrialized countries, with a prevalence of about 2% in the general population and about 9% in people over 75 years old.1,2 MR is classified as primary/degenerative when it results from a structural abnormality of the valve apparatus, or secondary/functional when it results from a disturbance of ventricular or annular geometry and/or function that impairs leaflet coaptation.3

Secondary MR (SMR) represents the majority of MR and accompanies left heart dysfunction, where its presence has been strongly associated with decreased quality of life, increased heart failure hospitalizations, and increased mortality.4–8 The prevalence of SMR in patients with heart failure is high. Robbins et al. reported a prevalence of moderate or greater SMR of 45% in outpatients and 63% in inpatients with heart failure with reduced ejection fraction.5 In a series of 558 outpatients with heart failure and a left ventricular ejection fraction (LVEF) of ≤35%, 39% had at least moderate MR and 17% had moderately severe to severe MR.6 In a meta-analysis of 53 studies and 45,900 patients, SMR was associated with increased risk of cardiac mortality, heart failure hospitalizations, and a composite endpoint of death, heart failure or transplant.7 In patients on guideline-directed medical therapy (GDMT), severe SMR may improve over time but may also persist or appear in those with less than severe SMR at baseline. Whereas mortality in the former group is comparable to that of patients who never develop severe SMR, the presence of sustained severe SMR or worsening SMR in the latter groups has been shown to be independently predictive of poor outcomes.8

The surgical correction of primary MR with either repair or replacement has strong support in European and US valvular heart disease guidelines with several level 1 recommendations.9,10 Surgical intervention to reduce SMR, however, has not been shown to improve outcomes and, despite the prevalence of SMR and its association with poor prognosis, the same guidelines provide no class 1 recommendations for the treatment of SMR. However, mounting evidence suggests an important role for percutaneous intervention to reduce SMR.

The MitraClip device (Abbott) is placed via a percutaneous, transseptal procedure and is used to approximate the edges of the anterior and posterior mitral leaflets, in a manner similar to the Alfieri stitch surgical procedure. In the Pivotal Study of a Percutaneous Mitral Valve Repair System (EVEREST II) which enrolled patients with primary and secondary MR, patients randomized to the MitraClip device had improved safety profiles but there was less of a reduction in MR severity compared with those randomized to mitral valve repair.11 However, in a sub-group analysis of EVEREST II patients with SMR, transcatheter mitral valve repair and surgical mitral valve repair were similarly effective in reducing MR. These findings led to Food and Drug Administration approval of MitraClip for treatment of symptomatic primary/degenerative MR in surgically high-risk patients, and to a call for randomized controlled trials of transcatheter mitral valve repair for SMR.

The Cardiovascular Outcomes Assessment of the MitraClip Percutaneous Therapy for Heart Failure Patients with Functional Mitral Regurgitation (COAPT) trial, published in 2018, tested the hypothesis that percutaneous mitral valve repair to correct SMR in patients with heart failure would lead to improved outcomes and be safe.12 Its results were resoundingly positive and have reshaped the cardiology community’s approach to treatment of heart failure and SMR. 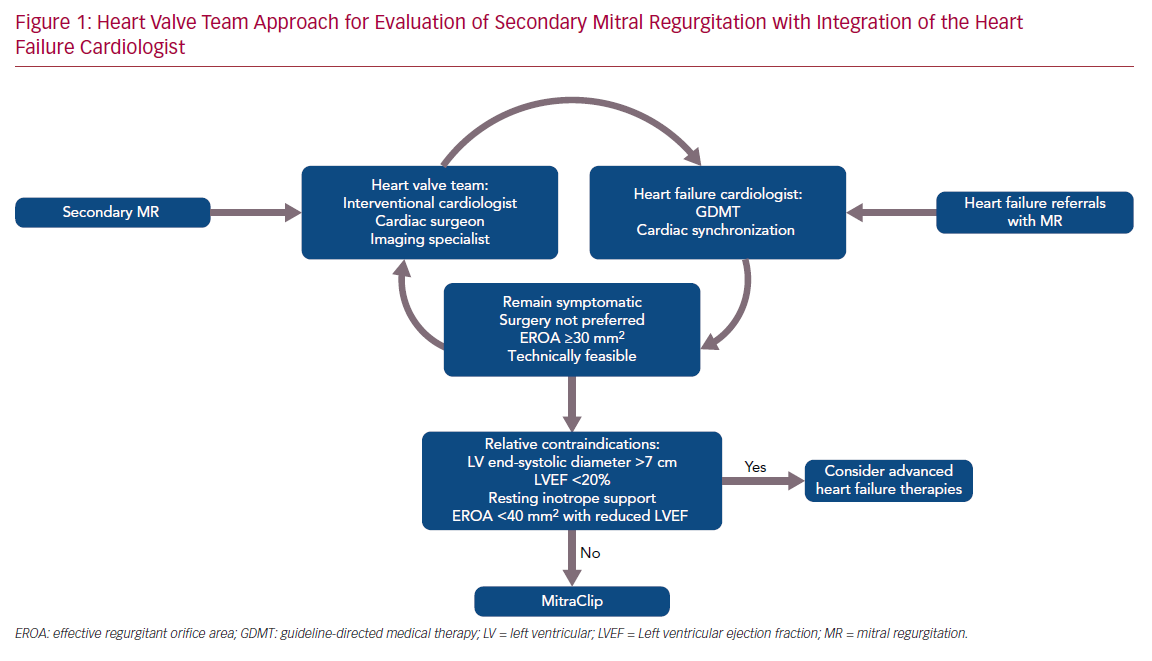 Between 2012 and 2017, the COAPT investigators enrolled a total of 614 patients with New York Heart Association (NYHA) class II–IV heart failure, an LVEF of 20–50%, and moderately-severe to severe SMR who remained symptomatic despite the use of maximally tolerated GDMT. Patients with left ventricular end-systolic diameters of >7 cm shown by echocardiography were excluded. Patients were randomized to either transcatheter mitral valve repair plus GDMT (device group) or GDMT alone (control group). Baseline characteristics, including NYHA class, mean LVEF and severity of SMR, were similar in both trial arms. Compared with patients in the control group, patients randomized to the device group exhibited a significant reduction in the primary effectiveness endpoint of heart failure hospitalizations within 24 months (35.8% per patient year versus 67.9% per patient year, p<0.001) as well as a 96.6% rate of freedom from device-related complications at 12 months. Moreover, the prespecified secondary endpoint of all-cause mortality within 24 months was significantly lower with device-based therapy than with medical therapy alone (29.1% versus 46.1%, p<0.001). In addition, all secondary endpoints were positive including a 16-point difference in the Kansas City Cardiomyopathy Questionnaire (KCCQ) and a 58 m improvement in the 6-minute walk distance, both favoring transcatheter mitral valve repair.12 These differences were both highly statistically significant but also clinically significant, given data suggesting that a 5-point difference in the KCCQ predicts improvements in clinical endpoints, such as heart failure hospitalizations and mortality.13

The results of COAPT have been met with a combination of excitement and confusion, the latter stemming in part from the findings of the Percutaneous Repair with the MitraClip Device for Severe Functional/Secondary Mitral Regurgitation (Mitra.FR) trial, a similarly designed study published shortly before COAPT, in which heart failure patients with severe SMR treated with MitraClip had similar rates of the composite primary outcome of death from any cause or unplanned heart failure hospitalization at 12 months, compared with patients treated with medical therapy alone.14 While the discordant results from COAPT and Mitra.FR have yet to be fully reconciled, several key points are worth noting.15,16

First, patient enrollment in COAPT was contingent on confirmation by a central eligibility committee that patients with reduced left ventricular function were taking maximally tolerated doses of GDMT. This requirement was not the case in Mitra.FR. Given that nearly 40% of patients with reduced ejection fraction and severe SMR may have significant reduction in MR with GDMT, it is possible that many patients enrolled in Mitra.FR and randomized to MitraClip had not had adequate medical treatment at the time of device therapy.9

Second, patients enrolled in COAPT compared with those enrolled in Mitra.FR had disproportionately greater degrees of MR as measured by effective regurgitant orifice area (EROA) relative to their left ventricular volumes raising the possibility, as suggested by others, that ‘disproportionate’ MR may be more responsive than ‘proportionate’ MR to device-based treatment.17 While rates of residual 3+ or higher MR immediately following device therapy in both trials were <10%, rates at 1 year were substantially higher in Mitra.FR compared with COAPT (17% versus 5%). Although concerns have been raised by Mitra.FR investigators about baseline differences in use of renin–angiotensin–aldosterone inhibitors among COAPT-enrolled patients, which were marginally significant by chance, a multivariable analysis published in the original COAPT manuscript demonstrated that the point estimates for benefit were similar after accounting for this consideration.12,16 Similarly, while Mitra.FR investigators have expressed concerns about potential differences in baseline heart rate and blood pressure among COAPT-enrolled patients, these parameters have been recently reported, demonstrating no significant differences between GDMT and GDMT+MitraClip.15,16 One final difference is that COAPT enrolled only NYHA class IV ambulatory patients, whereas Mitra.FR did not require NYHA class IV patients to be ambulatory.12,14

Whatever the explanation for the discordant results from the two trials, the statistically robust COAPT results (p=0.000006 for the primary effectiveness endpoint) have ignited interest in percutaneous therapies for SMR and highlighted the importance of a multidisciplinary approach that begins with the heart failure cardiologist and relies heavily on expertise from interventionalists, surgeons and cardiac imaging experts. At our center, these clinicians comprise a structural heart and valve team (Figure 1). The primary role of the heart failure cardiologist is to ensure that prior to consideration of MitraClip, patients are decongested and those with ejection fractions <40% are adequately treated with maximally tolerated GDMT and, when indicated, cardiac resynchronization therapy (CRT), all of which have been shown to improve SMR.18–21 In a patient who develops worsening signs and symptoms of heart failure, it is also important that the heart failure cardiologist and other team members recognize that the development of SMR may be the cause, especially now that there is evidence that transcatheter mitral valve repair may improve prognosis. Thus, patients in whom SMR persists or develops despite GDMT and/or CRT may benefit from MitraClip if they meet the criteria for COAPT enrollment, including an LVEF of 20–50%, a left ventricular end systolic diameter <7 cm, and an EROA ≥0.3 cm2 (or other criteria for severe MR if EROA cannot be determined).22 Markedly dilated ventricles may not benefit regardless of the severity of MR although this contention requires further examination.

Ongoing investigation is needed to further refine which patients with left ventricular dysfunction will most benefit from MitraClip. Despite the beneficial effects on heart failure hospitalizations, mortality, quality of life and functional capacity, mortality in COAPT was 29% at 24 months. Some of this may be accounted for by age – patients in COAPT had an average age of 72 years, which is about 8 years older than most heart failure trials. The MITRA.FR and COAPT investigators have combined data from both trials that will allow analyses to answer many outstanding questions, including whether those with ‘disproportionate’ SMR should undergo transcatheter mitral valve repair prior to receiving maximally tolerated GDMT and whether patients with more advanced heart failure might stabilize enough with MitraClip to avoid the need for a left ventricular assist device or heart transplantation.