ST-segment elevation myocardial infarction (STEMI) remains a leading cause of morbidity and mortality in the US. While there is a codified definition of STEMI, challenges in diagnosis remain due to variability in electrocardiogram (ECG) presentation, conditions with similar presentations, variability in the electrical manifestation of ST-segment elevation on ECG, and systems issues with access to rapid diagnosis that can make this diagnosis challenging. This article aims to review these challenges.

Heart disease remains the leading cause of death in the US, with ischemic heart disease comprising almost half of these deaths based on the most recent 2013 mortality data.1 While there have been reports of declining rates of acute myocardial infarction (AMI) from various registries and Medicare beneficiary reports, coronary heart disease remained the underlying cause of death in one out of seven deaths in the US.2–4 The acute coronary syndromes (ACS) are responsible for the largest share of mortality among the etiologies of coronary heart disease, with ST-segment elevation myocardial infarction (STEMI) comprising 30–33 % of all ACS and contributing to the highest mortality along this spectrum with a reported mortality rate of 5.0–8.0 % in 2006 based on data from the National Registry of Myocardial Infarction.5,6 Given the significant morbidity and mortality associated with STEMI, there has been a push from both local and national medical associations to improve the timely diagnosis of STEMI to decrease time to definitive therapy. However, there remain challenges in diagnosis from both clinical recognition and timing of diagnosis. This review article aims to evaluate some of these challenges in diagnosis.

AMI is defined as a clinical event involving myocardial ischemia in which there is evidence of myocardial injury. Typically, this involves a rise and fall of cardiac biomarkers, along with supportive evidence in the form of symptoms, suggestive electrocardiogram (ECG) changes, or imaging evidence of a new loss of viable myocardium.7 STEMI is a type of AMI with symptoms characteristic of myocardial ischemia associated with ST-segment elevation on the ECG. It is defined in the Third Universal Definition of Myocardial Infarction as new ST-segment elevation at the J point of at least two contiguous leads of ≥2 mm (≥0.2 mV) in men or ≥1.5 mm (0.1 mV) in women in leads V2 and V3 or ≥1 mm in any other contiguous precordial leads or the limb leads for either gender. New left bundle branch block (LBBB) was previously considered a STEMI equivalent; however, data have consistently shown that it is infrequently associated with true ACS and is no longer considered diagnostic of a STEMI. In addition, ST depression in ≥2 precordial leads (V1–V4) may indicate a posterior transmural injury pattern, which can happen concurrent with inferior ST elevation or in isolation (‘isolated posterior infarct’); this diagnosis can be confirmed by the presence of ≥1 mm ST elevation in the posterior (V7–V9) leads.8 It should be noted that there are criteria for diagnosing STEMI in those with known (‘old‘) LBBB referred to as the Sgarbossa criteria, though the imperfect sensitivity and specificity of these findings for STEMI often result in clinical ambiguity in making this diagnosis.9

While ST-segment elevation on the ECG is a diagnostic cornerstone for STEMI, this finding is not specific to STEMI. There are a variety of other causes of ST-segment elevation on the ECG (see Table 1) and the distinction between these entities is a combination of pattern recognition on the ECG and the clinical scenario, which are the two diagnostic points emphasized in the universal definition of STEMI. For example, ventricular aneurysms can have persistent ST-segment elevation in the leads corresponding to the aneurysmal myocardium. However, these ST-segment elevations should be present on prior ECGs and symptoms associated with the aneurysm are less likely to be consistent with acute myocardial ischemia, though they can present with ventricular arrhythmias due to the aneurysm itself or scar from prior infarctions. Myocarditis and pericarditis can also present with ST-segment elevation and chest pain, though the ST-segment elevation is usually more diffuse and the clinical symptoms often differ from those associated with acute ischemia.10 However, there can be so-called ‘localized’ myocarditis or pericarditis, which is often a diagnosis of exclusion depending on the diagnostic modalities (cardiac MRI, etc.) available to the practitioner. Takotsubo (stress-induced) cardiomyopathy is another clinical presentation that can be confused with STEMI. These patients often present after a stressful event, which can also predispose to acute plaque ruptures. The clinical symptoms and ECG findings can be similar between the two entities, so these patients are often referred emergently to the cardiac catheterization lab and the diagnosis is one of exclusion. Transient ST elevation and Wellens’ T waves also represent spectrums along the ACS spectrum, but do not definitively represent transmural myocardial infarctions and are not always managed with emergent reperfusion. These examples illustrate that, while the diagnosis of STEMI can appear objectively straightforward, there is a degree of clinical subjectivity in symptom assessment correlating with the ECG findings. In fact, prior data have shown that the sensitivity and specificity of distinguishing a true transmural infarct by ECG in the absence of clinical data were 65 % and 79 %, respectively, with an inter-reader agreement (kappa) of 0.33, reflecting poor reader agreement.11 These data suggest that it is paramount to integrate the ECG data with the clinical scenario instead of solely focusing on the metrics such as door-to-balloon times, possibly compromising the ability to evaluate non-coronary etiologies of ST-segment elevation on the ECG.12,13 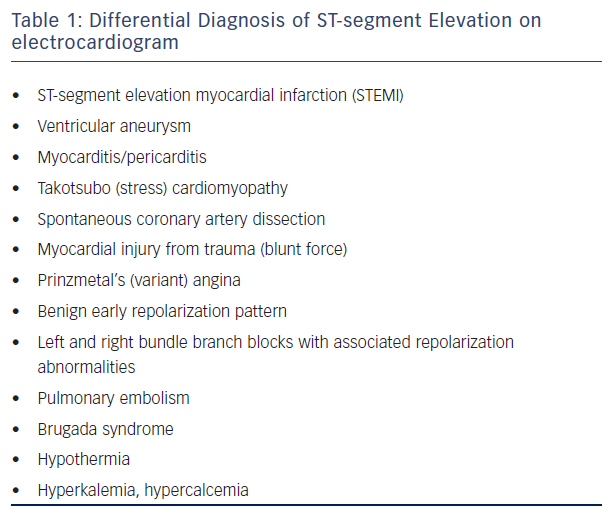 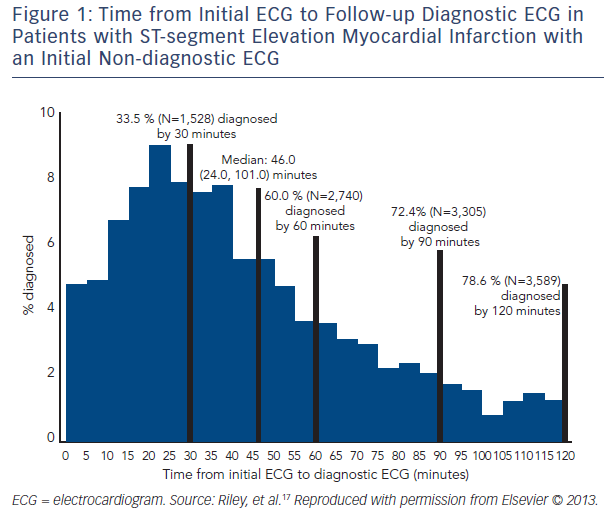 Many of the clinical scenarios on the differential diagnosis for chest pain and ST-segment elevation on the ECG can lead to false-positive diagnoses of STEMI that can only be excluded by coronary angiography. Some have been previously discussed, such as localized pericarditis/ myocarditis, Takotsubo cardiomyopathy, left ventricular aneurysm, and LBBB. Others include:

Electrocardiographic findings during AMI can vary substantially depending on the type, stage, and extent of infarction and timing of the ECG acquisition.14–16 A study published from the National Cardiovascular Data Registry (NCDR) Acute Coronary Treatment and Intervention Outcomes Network (ACTION)-Get With the Guidelines (GWTG) database17 that evaluated 41,560 subjects from 432 sites from across the US found that 11.0 % of subjects ultimately diagnosed with STEMI had an initial non-diagnostic ECG, with a diagnostic ECG being obtained within 90 minutes in 72.4 % of this group. Times from initial non-diagnostic ECG to ECG diagnostic of STEMI in this group can be seen in Figure 1. When clinical characteristics of those patients with initial diagnostic ECG versus those with subsequent diagnostic ECGs were evaluated, it was found that there was no significant difference in time of the ECG acquisition to symptom onset or coronary artery disease risk factors. The authors concluded that ECG surveillance during the evaluation of ACS is warranted. However, determining which patients with an initial non-diagnostic ECG need additional ECG surveillance could not be ascertained from patient comorbidities or presentation characteristics alone. In addition, although this study did not provide evidence for the optimal timing of follow-up ECGs in this patient group, it is noteworthy that 72.4 % of patients with STEMI with an initial non-diagnostic ECG had a diagnostic ECG within 90 minutes of their initial ECG, providing at least a framework of when to obtain follow-up ECGs.

Similar studies have shown that changes on serial 12-lead ECG evaluation (ST-segment elevation and/or depression, T wave inversion, development of Q waves) are more sensitive and specific than a single initial ECG alone for the detection of ACS.18–21 Additionally, several studies evaluating patients with suspected ACS have found that changes on continuous ST-segment monitoring during the first few hours of evaluation were independently associated with cardiac death or AMI at 30 days.22,23 Therefore, both the American College of Emergency Physicians (ACEP) and the American College of Cardiology (ACC)/American Heart Association (AHA) currently recommend serial ECG monitoring in patients being evaluated for ACS (class IB recommendation).24,25 However, given the increased diagnostic accuracy of novel troponin assays for ACS, it is no longer clear whether serial ECGs are a necessary component of the workup of ACS. The Are Serial Electrocardiograms Additive to Serial Second-generation Troponins in Predicting Acute Coronary Syndromes in Patients with Undifferentiated Chest Pain (ASAP CATH) study (ClinicalTrials.gov identifier NCT01953276) is a prospective cohort study designed to answer this question. This study finished enrollment in 2015 and should publish results in the coming year.26

Despite the ambiguity surrounding certain components of the diagnosis of STEMI, clinical assessment and ECG evaluation together are very sensitive for the diagnosis, with a miss rate of less than 5 % in Emergency Departments (EDs) across the US, though admittedly, miss rates are tremendously difficult to determine as they only incorporate missed patients who do not stay ’missed’.27 However, outcomes for patients with STEMI are driven in large part by not only making a definitive diagnosis, but also by making it in a timely manner (i.e. ‘symptom-to-device time’). A 2011 observational study from the ACTION Registry-GWTG reported that emergency medical services (EMS) transport was used for only 60 % of patients with STEMI, despite the significant positive correlation between arrival to an ED by ambulance (versus other transportation method) and faster times to reperfusion therapy.28 The importance of EMS involvement in diagnosing STEMI was also illustrated by several studies that showed that the performance of pre-hospital ECGs by EMS was associated with shorter reperfusion time and lower mortality rates from STEMI. The use of pre-hospital ECGs, particularly when coupled with communication of STEMI diagnosis and preferential transport to a percutaneous coronary intervention (PCI)-capable hospital, has been shown to result in rapid reperfusion times and improved clinical outcomes.29 Unfortunately, pre-hospital diagnoses remain relatively infrequent, in part because roughly half of all STEMI patients self-present to the ED, thereby obviating the opportunity for a pre-hospital diagnosis.30 For patients without a confirmed pre-hospital diagnosis, data suggests that establishing a STEMI diagnosis within 20 minutes maintains a strong correlation with door-to-treatment times <90 minutes and that this diagnostic period is far more heterogeneous than the other aspects of primary PCI.31 Thus, many initiatives have been implemented on local and national levels to address the importance of early STEMI diagnosis such as the ‘Door-to-Balloon’ (D2B) Alliance and the AHA’s ‘Mission: Lifeline’ program, which have resulted in significant improvements in symptom-to-treatment times and increased use of pre-hospital ECG evaluation for STEMI.32 Centers for Medicare and Medicaid Services (CMS) has also started altering their reimbursement based on this metric. As part of the ‘door-to-treatment’ push, ‘door-to-ECG’ time has been increasingly emphasized.

STEMI is an important diagnosis to make in a timely fashion due to its associated morbidity and mortality. Despite relatively codified definitions for the diagnosis, there remains some clinical subjectivity in the diagnostic components, including both the specific ECG findings and the timing of ECG testing. However, there have been large-scale improvements in symptom onset-to-diagnosis-to-treatment windows that have led to improvements in outcomes in this patient group.