Historically, pulmonary veins have been the focus of atrial fibrillation (AF) ablation therapy, but it is increasingly being recognized that localized electric rotors and focal impulse sources have a role in maintaining AF. Targeting of these sources using focal impulse and rotor modulation (FIRM)-guided ablation has resulted in elimination of the source and improved long-term outcomes. FIRM uses wide-area mapping of both atria in AF, using commercially-available basket catheters (to provide contact electrograms). However, not all data support the use of FIRM. This paper provides a description of rotor mapping and ablation. In addition, practical strategies for optimizing the technique are discussed, including: catheter positioning; accurate diagnosis of the presence and locations of focal sources; and amount of ablation performed in regions with rotors or foci.

A number of mechanisms underlie the different forms of atrial fibrillation (AF). Pulmonary vein (PV) ectopy may act as a driver maintaining AF or as a trigger in which spontaneous PV firing may initiate episodes of AF. Non-pulmonary triggers also exist. In addition, multiple wavelet re-entry and rotors may maintain AF.

While pulmonary vein isolation (PVI) is central to most AF ablation procedures, it is not a comprehensive solution. Despite complete isolation of the PVs, AF often continues. When persistent AF terminates during ablation, the PVs may not be isolated. In addition, an increasing number of repeat procedures involve patients with PVs that are already isolated. There is therefore a need for additional strategies in the catheter ablation of AF. These include: applying empiric lines on the left atrium (LA) roof, mitral or tricuspid isthmus; isolation of the vena cava or coronary sinus, ablation of complex fractionated electrograms, non-PV trigger ablation, posterior wall isolation, left atrial appendage isolation, scar ablation or homogenization; and rotor mapping and ablation. This article will focus on the use of rotor mapping.

Studies using multiple unipolar basket catheter recordings and analytical algorithms have demonstrated sites of complete rotation in each atrium that are spatially stable over multiple cycles.1 These rotors occur in small areas (1–3 cm2). Multiple rotors may operate concurrently, either in the same or the opposite atrium, occasionally playing off against each other, giving rise to complex activation patterns. Focal sources of spontaneous firing may also be observed. These findings led to the development of targeted source ablation (focal impulse and rotor modulation [FIRM]). In 2012, the prospective Conventional Ablation for Atrial Fibrillation With or Without Focal Impulse and Rotor Modulation (CONFIRM) study showed that FIRM-guided ablation resulted in freedom from AF in 88 % of patients, compared with 44 % with non FIRM-guided ablation.2

FIRM ablation employs basket catheters (Constellation™, Boston Scientific; or FIRMap™, Topera®) to provide contact AF electrograms; the latter has evenly distributed electrodes on the outer aspect of the basket splines and is the most commonly used. The procedure involves recording 1 minute of AF with 64 unipolar signals at 1 kHz sampling frequency. In initial studies, FIRM was performed first followed by PVI, with ablation firstly in the right atrium (RA) then in the LA. As a result of increased experience, the procedure now begins with PVI, improving efficiency and yielding cleaner FIRM maps without contamination by PV potentials. Mapping now begins in the LA then the RA. Importantly, the endpoints have also changed. Initially termination of arrhythmia was the endpoint, since the turnaround on mapping (25 minutes) made it difficult to determine rotor elimination. Recently, on-site processing speed has shortened the time from the beginning of electrogram acquisition to reading the map to around 2 minutes, allowing the assessment of rotor elimination (the current desired endpoint of ablation). A typical workflow is shown in Figure 1.

The unipolar basket electrograms are recorded for 1 minute then exported into the RhythmView™ computational system. The algorithm selects the 4-second segment with the best data, as well as a second segment, and generates a diagnostic movie that is interpreted by the operator to identify rotors or focal sources, and assess their position and strength. Visual aids such as the rotational activity profile can then be applied to the highlight areas of rotation. The software and operator must be in agreement before proceeding with ablation; a second segment may be examined to confirm the findings. 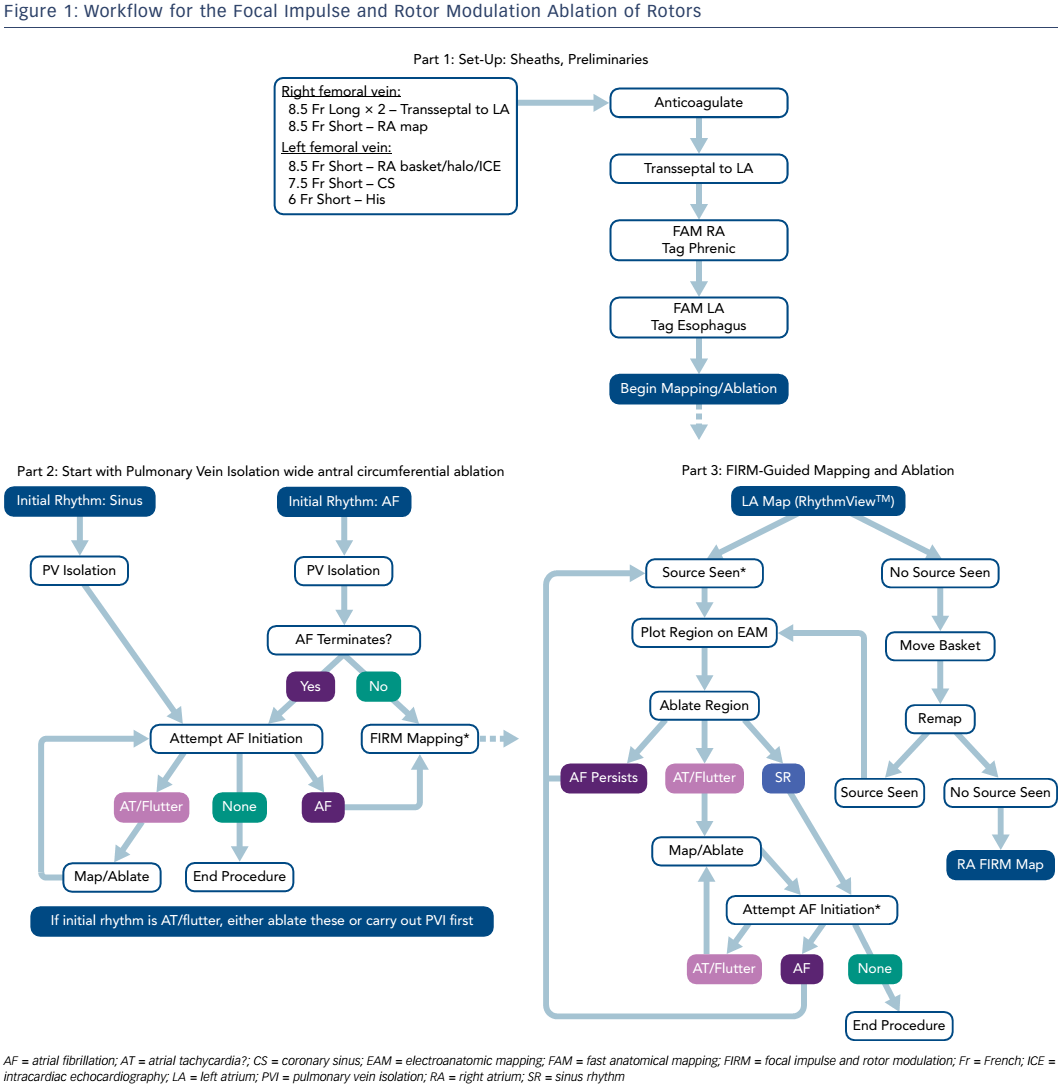 In order to perform the ablation, sources are displayed on an electroanatomic mapping system. Using coordinates from RhythmView™, the core of rotation is identified, either by displaying four electrodes from two involved splines (preferred) or displaying all 64 electrodes. Two electroanatomic mapping system views are examined: one from above the splines, and one in profile. A dense ablation of the source area should be performed, including the core area and a slight margin, to allow for any area of core precession. The endpoint is to eliminate near-field recordings in the target area. The ablated area is generally 1–8 cm2 and requires between 1 minute and 8 minutes of ablation. Once fully treated, the area is remapped with FIRM. If the source remains (a rare occurrence), options include checking residual electrograms and/or slightly enlarging the area. When AF terminates, it is useful to attempt to reinitiate AF following ablation using one or two extrastimuli at one or two sites – as well as burst pacing to 2:1 capture without and with catecholamine facilitation – to determine whether it is able to sustain or not. The use of FIRM adds around an hour to the duration of the procedure.

Not all reported data, however, support the use of FIRM-guided ablation.10–12 This is due partly to poor contact of the catheter with the atrial walls because of suboptimal basket positioning and coverage. For optimal results, all the splines must be fully deployed and evenly distributed. Twisting the shaft of the catheter aids separation of the splines. It is also important to have a good grounding electrode. Tips for reading maps include playing the movie two to three times without aids, and focussing on areas with consistent patterns, then turning on the rotational activity profile; if this suggests an area previously unseen, it should be inspected carefully to confirm. The use of the spotlight feature of the mapping system allows closer focus on the area of interest, reducing extraneous data. Additional segments should be reviewed for consistency. In addition, thresholds for identifying a rotor or focus vary among operators, and include a minimum of three rotations, rotation throughout a segment, and changing direction. Faster mapping allows us to see more sources, which can confound decision-making. Variability in the amount of ablation may also lead to inconsistent results; the author’s experience suggests that dense ablation is preferable.

Reasons for not achieving more frequent AF terminations may include other unstable mechanisms, such as multi-wavelet re-entry. In addition, other rotors may be active but remain undetected. Some terminations are delayed following ablation. Another criticism of the technique is the fact that long-term recurrent AF does not correlate well with AF termination. Substrate elimination must be confirmed before such correlations are attempted. Furthermore, not all rotors may be pathogenic. Further study is warranted; in addition, refinements in software will improve sensitivity and specificity.

While most agree that PVI is integral to AF ablation procedures, it is unclear which other strategies should be performed when AF persists. Rotors and foci are important in maintaining AF in many patients. Rotor/ focus mapping and ablation, with the endpoint of elimination of all rotors and foci, has been associated with improved outcomes. However, much of the data in support of FIRM-guided ablation has been obtained from single-centre case series; some small multicentre studies to date have yielded disappointing findings. There is a need for randomised multicentre studies to compare the technology with existing strategies. Future refinements in technology should further improve outcomes.