In patients with left ventricular (LV) dysfunction, a large atrial septal defect (ASD) provides an alternate pathway for left atrial emptying and prevents abnormal elevation of left atrial and LV filling pressures. In such patients, closure of the ASD can cause an increase in LV diastolic pressure with pulmonary venous hypertension and congestion. The protective effect of an ASD is attenuated or abolished in the presence of right ventricular (RV) dysfunction. Thus, an elevated LV diastolic pressure in the presence of an ASD indicates dysfunction or failure of both ventricles. In this situation, pharmacologic or mechanical unloading of the left ventricle may result in right to left shunting with arterial hypoxemia. In the absence of RV failure, creation of an ASD can reduce LV filling pressures. Management of patients with heart failure and an ASD requires accurate assessment of atrial pressures and shunt flows as well as consideration of the functional state of both ventricles.

Pulmonary venous hypertension and congestion that occurs with left ventricular (LV) failure is generally not seen in the presence of a large atrial septal defect (ASD). As long as right ventricular (RV) function and distensibility are not impaired, the ASD provides an alternate pathway for atrial emptying, thus preventing or attenuating elevated LV filling pressures. When RV dysfunction develops and right atrial pressure increases, this ‘protective’ effect of the ASD is reduced, the left to right shunt flow declines, and the LV filling pressures increase.1–6 These observations indicate that the hemodynamic consequences of ASD closure (or the creation of an ASD) are influenced by the functional state and the interaction of the two ventricles. In this brief review, we emphasize pulmonary venous, left atrial (LA), and LV diastolic pressures, and consider the impact of an ASD on the hemodynamics of heart failure.

Closure of an Atrial Septal Defect

Symptomatic patients with uncomplicated ASD generally show an improvement in functional capacity after closure of an ASD. However, some patients require special consideration. For example, in the presence of an abnormal left ventricle, closure of an ASD removes its protective effect, and contributes to the poor clinical outcome that is occasionally seen.4,5 A modest increment in LA pressure is often seen after closure of an ASD, but large changes in pressure are uncommon and seen primarily in older patients with hypertension and/or LV dysfunction.5,7–10 Before proceeding with ASD closure in such patients, consideration should be given to test occlusion of the ASD to evaluate the potential for a deleterious increase in LA pressure.

An example of the effect of ASD closure in a patient with RV and LV dysfunction and mitral stenosis (valve area = 1.1 cm2) is shown in Figure 1. Transient occlusion of the ASD resulted in an increase in pulmonary capillary wedge pressure (PCWP) from 18 to 23 mmHg. The increase developed gradually over several minutes, stabilizing after 3 minutes. The pressure returned to baseline after removal of the occluding balloon catheter.

Some authorities suggest that an LA pressure increase exceeding 3 mmHg during test occlusion should prompt a consideration of the use of a fenestrated occluder that reduces, but does not abolish, the left-to-right interatrial shunt.7 This approach should decrease the shunt flow and reduce the volume load on the right heart, and would potentially provide a lower LA pressure than would be expected with a complete closure.9 Others use an LA pressure increment of 10 mmHg (during test occlusion) to identify high-risk patients.8 Test occlusion of the ASD in patients at risk of a significant increment in LA pressure is relatively easy to recommend, but the exact partition pressure that would optimally identify patients who might benefit from a fenestrated occluder is not known.

Creation of an Atrial Septal Defect as a Therapeutic Measure 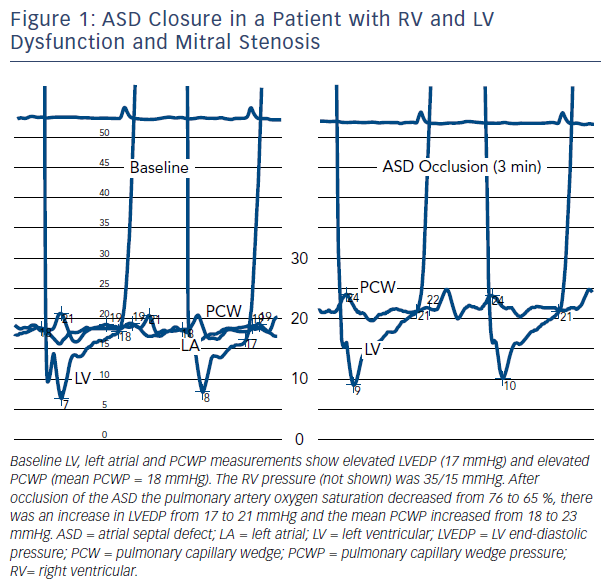 Bland and Sweet also recognized this potential benefit and created an ‘extracardiac shunt to provide an outlet from the high-pressure left auriclepulmonary vein area into the systemic venous bed.’12,13 The anastomosis of a right pulmonary vein to the azygous vein produced a significant reduction in LA pressure and clinical improvement in their patients with end-stage mitral stenosis and severe pulmonary hypertension.

Partial opening of a closed ASD has been reported in patients with refractory pulmonary edema after surgical closure of the defect.5 This being the case, it would seem appropriate to consider the creation of an ASD in some patients with recurrent hospitalization for acute pulmonary edema, particularly those with hypertension and diastolic heart failure.14 In the presence of LV diastolic dysfunction, a relatively small reduction in LV and LA volume could produce a large reduction in LA and pulmonary venous pressure.15 Ideally, the ASD should be made small enough to limit the left-to-right shunt when LA pressure is not significantly elevated, but large enough to provide the protective unloading discussed above.5,7

The feasibility and potential value of implanting an interatrial device that provides a left-to-right shunt in patients with LV dysfunction has been confirmed in a well-designed observational study.16 The study included 64 symptomatic patients with an LV ejection fraction >40 %, and an elevated PCWP (>15 mmHg at rest or >25 mmHg during supine exercise). In the presence of a normal LV end diastolic volume, most of such patients have significant diastolic dysfunction or diastolic heart failure.15 After implantation of the shunt device there was a modest reduction in the pressure gradient between the left and right atria, in association with a barely detectable left-to-right shunt (Qp/Qs = 1.25). These changes were accompanied by symptomatic improvement. A most important result was an improvement in exercise capacity that was achieved without an increase in the PCWP. There is little reason to believe that these salutary results would be different in patients with systolic heart failure, but it should be recognized that similar benefits should not be expected in patients with RV failure.

Patients with severe pulmonary hypertension and right heart failure have undergone atrial septostomy in an attempt to blunt the progression of right heart failure and promote blood flow to the systemic circulation.17 The increase in systemic flow may promote increased oxygen delivery to the periphery despite the arterial hypoxemia that accompanies creation of a right-to-left interatrial shunt. A percutaneous balloon atrial septostomy might be considered in patients with refractory heart failure, but before the procedure is carried out some caveats deserve mention. First, the creation of an ASD in such patients can cause a decrease in right heart filling pressures and venous congestion, but only if the LV filling pressures are not elevated. Second, it is difficult, if not impossible, to reliably identify patients who are likely to benefit from atrial septostomy, and it should be recognized that some patients may not benefit and some may worsen after creation of an ASD.

It has long been recognized that a right-to-left shunt can develop as a consequence of RV overload. More recently, LV mechanical support systems have been shown to precipitate right-to-left shunting and arterial hypoxemia in patients with heart failure with previously unrecognized ASD, patent foramen ovale, and iatrogenic/acquired defects.18–21 The mechanical reduction in LV filling pressures in the presence of elevated right atrial pressure promotes right-to-left shunting. One report included measurement of central venous pressure and arterial PO2 over a range of right atrial pressures.21 This report documented arterial hypoxemia (PO2 = 40 mmHg) that improved dramatically (PO2 = 430 mmHg) when central venous pressure was reduced from 23 to 12 mmHg. These reports further illustrate the concepts of ventricular interaction discussed above and they emphasize the importance of considering the diagnosis of right-to-left intracardiac shunting in critically ill patients who develop arterial hypoxemia while on an LV-assist device.

ASD closure in patients with suspected LV or RV dysfunction should be performed only after consideration of the hemodynamic effects of closing the defect. A careful assessment of changes in filling pressures should be performed with test balloon occlusion of the ASD. Conversely, creation of an ASD with the purpose of unloading the left ventricle may offer therapeutic promise in select patients with LV dysfunction and symptomatic heart failure. The hemodynamic consequences of either closure or creation of an ASD are intimately dependent on the functional state and interaction of the two ventricles.